As always, SCOTUSblog has all the details on the case, California v. Texas and Texas v. California (both of which have been consolidated for oral arguments on whether the ACA’s requirement that Americans get health insurance is constitutional and, if not, whether the rest of the ACA can survive).

While a decision is not expected until the spring, the oral arguments may offer clues about how the justices will rule in a case that could have widespread implications for the U.S. health system and for the provisions in the law itself. Among the most significant of those provisions are the ones that protect Americans who have pre-existing conditions and the portions of the law that allow states to expand eligibility rules for Medicaid enrollment.

Amy Goldstein, who covers national health care policy at The Washington Post, wrote that striking down the law “would upend the health-care system affecting almost all Americans, and “collapse the health insurance system,” affecting at least 23 million who are enrolled under the ACA. Some 11 million would lose coverage through the ACA marketplaces, and about 12 million would lose coverage through Medicaid expansions in all but 12 states, she explained.

Ending the law would result in less money going to community health centers, the federal Centers for Disease Control and Prevention and rural hospitals, all in the middle of a worsening coronavirus pandemic, Goldstein added.

The recent appointment of Amy Coney Barrett to the high court has bolstered the conservative majority, she noted. In this Politico article, Susannah Luthi also wrote about how a conservative-leaning court could reshape the health care system.

For health care journalists covering this case, it may be instructive to recall what got us to this point, 10 years after the law was passed and six years after it became effective. For that, Katie Keith, a lawyer who covers health care law at Health Affairs had a good review of the decision in December 2018 that led to this case going to SCOTUS this week.

“On December 14 [2018], Judge Reed O’Connor, a federal judge in the Northern District of Texas, found the individual mandate, and with it the entire ACA, to be invalid. His decision did not halt enforcement of the ACA — which remains fully in effect in all 50 states and the District of Columbia — but sets up the potential for yet another Supreme Court decision on the validity of all or major parts of the law,” she wrote. Two months ago, she wrote about the case again, this time in a round up of other court decisions related to the ACA.

As a lawyer, health policy expert, and a researcher at the Georgetown University Center on Health Insurance Reforms, Keith is an important resource for health care journalists.

The Center on Health Insurance Reforms also is an important resource because the lawyers and health policy experts there have written about some of the potential effects of a SCOTUS ruling on the ACA. See, for example, these CHIR blog posts from last month, State Efforts to Protect Preexisting Conditions Unsustainable Without the ACA, and What’s at Stake: The World of Health Insurance for People with Pre-Existing Conditions before the ACA.

As Karen Pollitz explained in a report last month, “Pre-existing Conditions: What Are They and How Many People Have Them?,” health insurance plans that comply with the ACA prohibit commercial health insurers from discriminating against policyholders based on health status. That means insurers cannot decline to offer them ACA-compliant coverage, cannot charge them more, and cannot amend their policies to exclude them.

See this KFF report for an estimated number of nonelderly adults with declinable pre-existing conditions in each state.

It’s important to note that policies that do not comply with the ACA, such as short-term, limited-duration insurance (STLDI) plans, can decline to offer coverage, can charge more, and can amend policies. Earlier this year, we wrote about the shortcomings of STLDI plans here and here.

While critics of the ACA may point to President Trump’s executive order on pre-existing conditions, KFF’s Larry Levitt explained in a report last month, “Protecting People With Pre-Existing Conditions Isn’t As Easy As It Seems.” In that report, he wrote that the order has no force of law. Also, Trump has never released an ACA-replacement plan to protect Americans with pre-existing conditions. Jon Greenberg, a senior correspondent with PolitiFact writes that the executive order has no enforcement power. 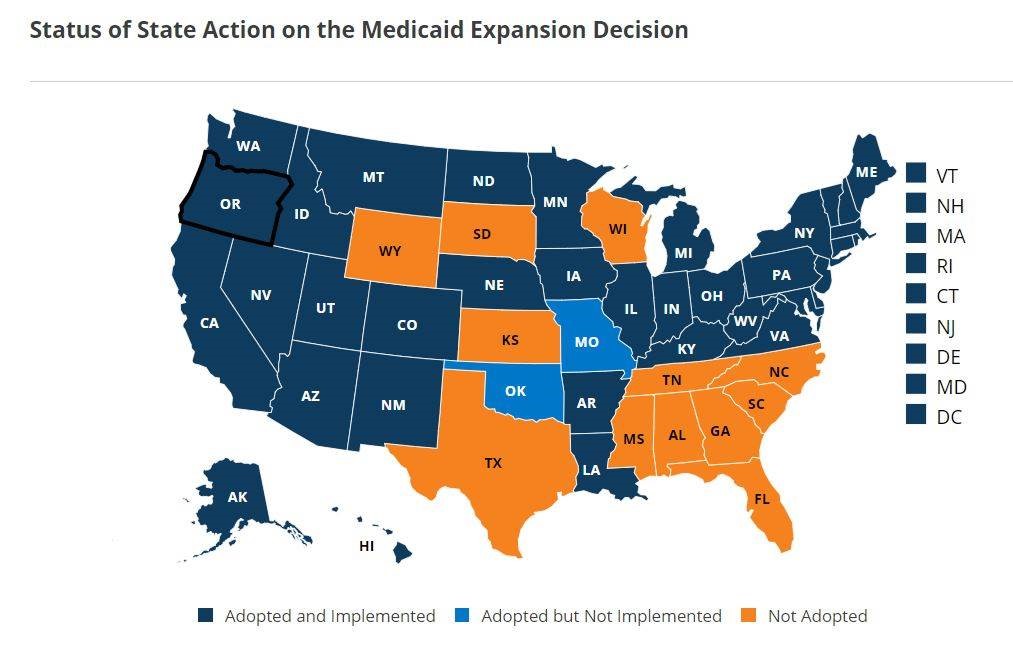 This map is available in an interactive format on the KFF site.To date, 38 states and the District of Columbia have expanded eligibility for Medicaid under the Affordable Care Act. Twelve states have not adopted the expansion, according to KFF. The status for each state is based on KFF analysis of state expansion activity.

Also at risk if the court kills the ACA are the programs in 38 states and the District of Columbia that have expanded eligibility for those who wish to get their health insurance and prescription drug coverage through state Medicaid programs. Two other states (Missouri and Oklahoma) recently expanded such eligibility rules but have not yet implemented those plans as we reported in September. See this KFF map for details.

In addition, Georgia Gov. Brian Kemp has proposed a plan to revise the state’s Medicaid eligibility rules to allow thousands of Georgia’s poor and uninsured adults who meet certain work requirements to sign up for Medicaid, according to Ariel Hart, a health policy reporter at the Atlanta Journal Constitution. Some 50,000 Georgia residents could benefit within two years, she added. Kemp’s plan also would shut down the federal ACA marketplace in Georgia and instead direct 400,000 Georgians to health insurance companies or brokers, she noted.

For more on how the loss of Medicaid would affect individuals, see these KFF reports:

For a detailed view on some of the effects of a SCOTUS decision on the ACA, see this report from the left-leaning Center on Budget and Policy Priorities.