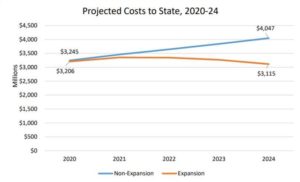 According to reporting at NPR by Alex Smith, 53.25% of 1.2 million voters approved the measure, meaning Missouri joins 36 other states and the District of Columbia in expanding Medicaid under the Affordable Care Act. The approval came despite strong opposition from Republicans and rural voters, Smith wrote.

Smith noted an important element about how the measure was structured: “Voters in Missouri approved creating a state constitutional amendment that will open Medicaid eligibility to include healthy adults starting on July 1, 2021.”

The Missouri ballot measure was similar to what voters in Oklahoma approved two months earlier.

On June 30, Oklahoma voters narrowly approved State Question 802, which will expand eligibility to include many people previously ineligible due to income limits on the program, according to reporting by Curtis Killman for the Tulsa World.

As in Missouri, voters were asked to amend the state constitution. In this way, the Oklahoma ballot measure prohibits state officials from restricting who can qualify for Medicaid beyond the federal-state program’s requirements.

Voters approved similar language under Missouri Amendment 2, Medicaid Expansion Initiative, which amends the state constitution and prohibits officials from placing additional burdens in eligibility or enrollment standards on persons covered under Medicaid expansion than any other population eligible for Medicaid.

Compare the experience in Oklahoma and Missouri with what happened in 2018 when voters in Idaho, Nebraska and Utah approved expanding Medicaid under ballot initiatives in their states. Legislative and executive actions, combined with the federal Medicaid 1115 waiver process, delayed newly eligible residents from getting insurance coverage under Medicaid.

According to the Commonwealth Fund report, “Oklahoma voters approve expanding Medicaid eligibility in ballot measure,” Idaho did not begin enrolling eligible consumers in the expanded Medicaid program until November 2019, with coverage beginning Jan. 1, 2020. Nebraska submitted its Medicaid expansion plan to federal officials in April 2019, but coverage is not scheduled to begin until Oct. 1, 2020.

To avoid such issues, proponents of Medicaid expansion in Oklahoma and Missouri recognized the need to amend the state constitutions.

In Oklahoma, a state plan to amend its Medicaid program must be submitted within 90 days of passage. No additional restrictions can be placed on eligibility or enrollment for the expansion group than are applied already to traditional Medicaid eligibility groups. The Missouri measure has similar language and would require coverage for newly eligible individuals to begin by July 1, 2021.

In Oklahoma, the approval means that more than 200,000 low-income individuals aged 19 to 64 who earn no more than 133% of the federal poverty level are eligible for Medicaid coverage. Under federal poverty guidelines, a single adult making less than $17,236 annually, or adults in a family of four with a household income of less than $35,535 annually, would qualify.

While the federal government would pay 90% of the cost for newly eligible adults, the state must pay 10% of the cost, except for the federal share for the cost of insuring Native Americans that would rise to 100%, Families USA noted in a report, “Medicaid expansion in Oklahoma: creating jobs, helping the state budget, and protecting families.”

That same report noted that Medicaid expansion could provide health insurance coverage to 279,000 uninsured Oklahoma residents and bring more than $1.3 billion in federal funds for health care. A report from the Oklahoma Policy Institute, “Medicaid expansion: Ten years of unparalleled return on investment, improved outcomes,” projected that health outcomes and financial stability improve for those who are newly eligible for health insurance. Also, those families would pay less in out-of-pocket medical costs, the report said.

In the 2019 report, “Analysis of the fiscal impact of Medicaid expansion in Missouri,” researchers from the Center for Health Economics and Policy at the Institute for Public Health at Washington University, estimated that 458,000 nonelderly adult citizens of Missouri with income below 138% of the federal poverty level could be eligible for health insurance coverage under Medicaid. Included in this number were 190,000 uninsured adults, 72,400 residents with private coverage from another source and 195,750 adults with coverage from an employer.