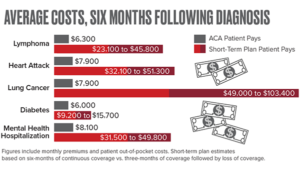 Milliman actuaries compared costs under health insurance plans that comply with the requirements of the Affordable Care Act versus costs of short-term health plans that do not meet the ACA’s requirements.

New research about short-term, limited-duration health plans shows that none of the plans studied covered pre-existing conditions and all had coverage limits, according to a new report from Milliman, an actuarial consulting firm. Only one-third of the plans covered prescription drugs and only 42% covered mental health, according to the report.

The Lymphoma and Leukemia Society commissioned the report, “The impact of short-term limited-duration policy expansion on patients and the ACA individual market.” For the study, Milliman actuaries Dane Hansen and Gabriela Dieguez outlined the financial costs a consumer enrolled in a short-term health plan would face if diagnosed with one of five health conditions: diabetes, heart attack, lung cancer, lymphoma or if hospitalized for a mental health problem.

In the first six months after being diagnosed with lymphoma, a patient with a short-term plan could pay $23,100 to $45,800 in out-of-pocket expenses, including the premiums and cost-sharing for medical expenses, the report showed. If the same patient had a plan that complies with the requirements of the Affordable Care Act (ACA), he or she would pay $6,300, on average, in out-of-pocket expenses over the same period.

In previous coverage about short-term plans, we’ve reported on how these plans do not pay for care that ACA-compliant plans cover. See this blog post from January 2019 and this one from February 2018.

A newly diagnosed patient with lung cancer, for example, could face out-of-pocket expenses of more than $100,000 in the six months following such a diagnosis if the short-term plan was not renewed and the patent became uninsured, the report showed.

Before a consumer could get an ACA-compliant plan during the next enrollment period or during a special enrollment, that consumer could face higher costs. Hospitals and other health care providers generally charge those consumers more than consumers who have coverage through the ACA marketplace or an employer. That’s because insurers negotiate lower rates with providers, the report said.

Wu provided an important caveat about short-term plans in Texas (and in any state that has not expanded Medicaid), explaining that these plans can be used to cover some costs for consumers who once had comprehensive coverage under an ACA-compliant plan, such as someone who had insurance through an employer and then left that job. Also, these plans are attractive to healthy patients seeking lower premiums. “That’s especially true in Texas, which has not expanded Medicaid,” she wrote.

Another problem with short-term policies is that they do not cover two essential health benefits (EHBs) that ACA-compliant plans must cover: prescription drugs and mental health benefits, the report said.

Hansen and Dieguez estimated that due to repeal of the ACA’s individual mandate and other market factors, some 6 percent of consumers currently enrolled in ACA-compliant plans on the individual market would choose plans (such as short-term plans) next year that do not cover the minimum EHBs.

For reporters covering short-term plans, there are plenty of stories to write about consumers who buy such plans and then face high unexpected costs. At North Carolina Health News, Liora Engel-Smith wrote that the state Department of Insurance showed an increase in consumer complaints about such plans last year (75 in 2019 versus 48 in 2018), according to data NC Health News obtained.

“More than half of the complaints involved issues surrounding denied claims, exclusions of pre-existing conditions and delayed payments to consumers,” she wrote.

At WKSU-Kent, Ohio, Tanisha Thomas reported on a warning from a health finance expert about short-term plans that the AARP was testing in Ohio and 16 other states. J.B. Silvers, a professor of health finance at Case Western Reserve University, said some consumers struggle to understand the full costs of short-term plan coverage versus coverage under ACA-compliant plans, she wrote.