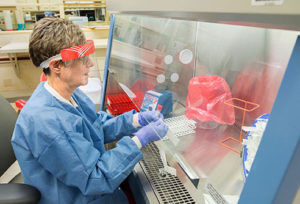 Leaving anyone uninsured during this viral pandemic increases the risk of spreading the disease.  A warning report on Monday from the Urban Institute projects that an estimated 25 million to 43 million Americans may lose their employer-sponsored health insurance coverage in the coming months due to the economic effects of the new coronavirus.

In “How the COVID-19 Recession Could Affect Health Insurance Coverage,” UI senior fellow Bowen Garrett and research associate Anuj Gangopadhyaya base their estimate on the possibility that the unemployment rate could reach as high as 20%. The report was produced with support from the Robert Wood Johnson Foundation.

Eric Morath in The Wall Street Journal on Sunday reported that economists expect the federal Department of Labor to report an unemployment rate of 16.1% in the United States. April employment figures are expected on Friday, May 8.

AHCJ will host a webcast, “How COVID-19 Will Impact Rising Insurance Premiums,” at noon ET on Thursday, May 7, with Sabrina Corlette, a research professor at Georgetown University’s Center for Health Insurance Reform (CHIR). Click here to submit questions.

“We’ve always had a patchwork health care system that’s riddled with holes, particularly for lower income populations,” Corlette told me. “That includes people who are working in industries that don’t offer generous health benefits, and people who work for small businesses that don’t offer health insurance and people in immigrant communities. There’s nothing that exposes the holes in our system like a pandemic.”

What’s more, health care providers, nursing home and long-term care staff, food-service workers, taxi and bus drivers, sanitation workers and others who engage with the public every day are among the most vulnerable because many of them lack health insurance, Corlette noted. “Those are the people we’re asking to remain on the frontlines, and they are people who are least likely to have robust health insurance coverage should they get sick.” 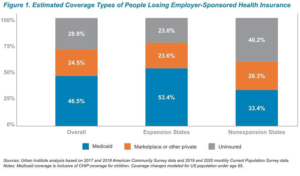 Image: The Urban Institute/Robert Wood Johnson FoundationResearchers from the Urban Institute estimate that if the U.S. unemployment rate reaches 20%, the rate of those without health insurance will rise to almost 29% overall. But in states that expanded Medicaid under the Affordable Care Act, the uninsured rate will be 23%, and in non-expansion states, the uninsured rate will be more than 40%, the report shows. {Enlarge image.]

Corlette and her colleagues at CHIR have written extensively about the need for insurers and employers to fill the gaps in coverage that existed before the virus. They noted that the economic fallout from the pandemic has exacerbated those gaps.

Corlette also will outline some of the questions journalists can ask beginning this month as health insurers propose rates for coverage in 2021. Those rate requests will go to state insurance departments.

Another issue that Corlette will address is how to cover the underinsured, such as those with short-term, limited-duration (STLD) health insurance policies. She’ll offer guidance on how journalists should question state insurance departments about how many residents have enrolled in STLD plans that some insurers and associations offer. STLD plans leave consumers vulnerable to gaps in coverage because they do not comply with the consumer protection rules in the Affordable Care Act.

Last month, Corlette wrote in her blog about how expanded coverage for Covid-19 testing built into the Families First Coronavirus Response Act (passed March 18) and the Coronavirus Aid, Relief, and Economic Security (CARES) Act (passed March 27) followed similar actions in some states. She noted that these federal laws contain loopholes that may expose consumers who are tested to unexpected high costs later. Since that post, the federal Centers for Medicare and Medicaid Services addressed some of these gaps in a document to guide employers, health insurers, providers and others on  implementing those laws.

Even before Congress passed the federal stimulus bills in April, several insurers said they would waive consumers’ deductibles and cost sharing for COVID-19 testing, according to a blog post from Corlette’s colleague Emily Curran. It was a necessary first step, but as Carmen Heredia Rodriguez reported for Kaiser Health News and NPR that some consumers still face surprise bills.

Congress also included in the Families First law and in the CARES Act some rules requiring all health insurers to pay to treat their members who develop COVID-19. Although insurers were not required do so, several health insurance companies announced they would waive all cost sharing for COVID-19-related treatment. These actions, as well similar rules states have issued, are designed to assist consumers who otherwise might have delayed or foregone treatment.