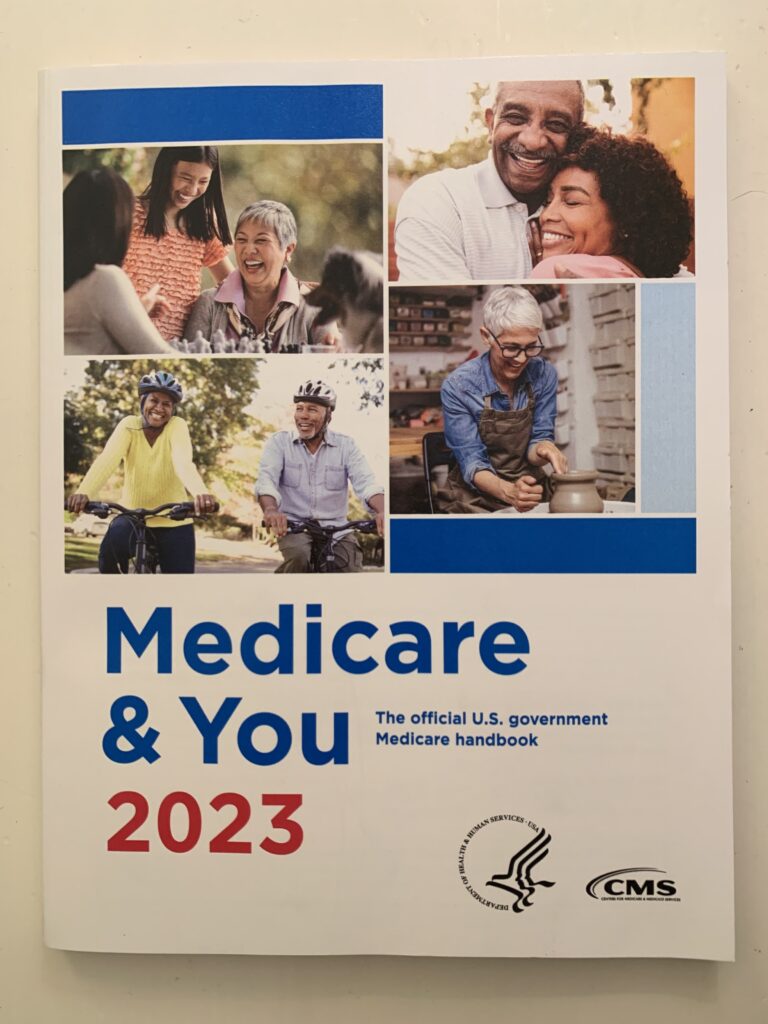 Caption: The Medicare & You 2023 handbook explains the rules for traditional Medicare, Medicare Advantage and Medigap plans.

On Friday, Cheryl Clark reported for MedPage Today that the federal Centers for Medicare and Medicaid Services (CMS) said it reviewed thousands of complaints about confusing, misleading, or inaccurate ads for MA plans and it used secret shoppers to document deceptive telephone pitches from agents and brokers selling MA plans to consumers. In a letter to all insurers offering MA and prescription drug plans, CMS said some insurance agents were unduly pressuring beneficiaries and failing to provide accurate or complete information to help seniors make informed enrollment decisions.

To counter the barrage of misleading or inaccurate ads, reporters need to warn consumers about the biggest flaws in MA plans, including frequent care denials, narrow networks that limit members’ choice of physicians and hospitals and the trouble members face getting out of MA for better coverage under Medicare Supplement (called Medigap) plans.

In addition to these problems, federal investigators have accused most large health insurers operating MA plans of committing fraud to boost profits by billions of dollars, according to reporting from Reed Abelson and Margot Sanger-Katz in The New York Times earlier this month. On Monday, the federal Department of Justice filed a civil fraud lawsuit against Cigna for artificially inflating its MA payments. For years, Fred Schulte, an investigative reporter for Kaiser Health News, has reported on MA fraud among health insurers.

As the federal Department of Health and Human Services announced last weekend, Medicare open enrollment began Oct. 15 and runs through Dec. 7. Until then, seniors can choose or change their MA plans (under Medicare Part C), or their prescription drug plans (Part D), return to original Medicare (Part A and Part B) and enroll in Medigap plans.

One reason for such rapid growth may be the commission’s agents get for selling these plans. Clark reported that CMS sets relatively high commission rates for insurance agents selling MA plans when compared with the rates set for agents selling plans to those who choose traditional Medicare with supplemental plans.

For journalists covering MA open enrollment, here are some resources for covering the flaws in MA plans. See, for example, this article, “The Medicare Advantage Trade-Off: Saving Money, Losing Access,” in which Clark included a harrowing anecdote from a physician who thought a cancer patient had an MA plan. The physician worried that the patient would face a long delay for an expensive PET scan, but when the doctor learned the patient had a Medigap plan, the patients’ PET imaging scan was done in three days, she wrote.

To review physicians’ requests for care, all health insurers use prior authorization (PA), a time-consuming process that results in frequent denials. An endocrinologist told Clark that PA is always worse when a patient has MA. Another physician expects all referral requests for patients with MA will be denied at least once, she wrote.

In April, Reed Abelson reported on this problem for The New York Times, citing reports from the federal Office of Inspector General, including this one, “Some Medicare Advantage Organization Denials of Prior Authorization Requests Raise Concerns About Beneficiary Access to Medically Necessary Care,” and this one from 2018, “Medicare Advantage Appeal Outcomes and Audit Findings Raise Concerns About Service and Payment Denials.”

The second drawback is that many MA plans — especially those with low-cost or no premiums —have limited networks. That means any MA member with a high-cost illness such as cancer, dementia, diabetes, heart disease, obesity or other chronic condition may be unable to see a specialist physician or go to an out-of-network hospital for specialized care.

Seniors with chronic conditions who find MA plans too restrictive or too costly because of high co-payments and deductibles often disenroll in favor of traditional Medicare. Research shows that some low-quality MA plans may be unattractive to sicker and low-income enrollees, according to a report from the Medicare Rights Center, “Why Do People Leave Medicare Advantage for Original Medicare?” Traditional Medicare allows a wider choice of doctors, the report showed.

In another article for MedPage Today, Clark reported that the Mayo Clinic sent letters this fall to Medicare beneficiaries who received care in the past three years at Mayo’s Arizona and Florida facilities that those sites were out-of-network for most MA plans. The letter said, “Out-of-network care is not in the best interest of patients and does not support Mayo’s model of care,” she added.

The third problem is the struggle seniors face if they need to leave MA in favor of a Medigap plan. For younger and healthier seniors, MA plans may be appropriate, but at some time, many seniors are likely to be diagnosed with a chronic condition.

Several seniors told Clark that they enrolled in MA plans at age 65 with no or low premiums when they were relatively healthy. “But after they needed care for newly diagnosed chronic conditions, they found themselves paying far more in co-pays and deductibles than a supplemental plan would have cost them,” she wrote. “Now with pre-existing conditions they’re ineligible to sign up for a supplement. They’re stuck.”

For most MA members seeking to enroll in a more appropriate Medigap plan, health insurers will review their medical history in a process called medical underwriting. Using this assessment, the Medigap insurer could make coverage unaffordable. My colleague Liz Seegert reported on this issue and linked to an excellent tip sheet that Clark wrote for AHCJ about it.

Medigap insurers in all but four states will conduct medical underwriting on any senior who does not buy a Medigap policy during initial Medicare enrollment, according to a report from the Kaiser Family Foundation in 2018. After underwriting, an insurer can deny the application or charge a higher premium. For all Medicare beneficiaries aged 65 and older, Connecticut, Maine, Massachusetts and New York require Medigap insurers to sell policies continuously or for at least one month a year, KFF said. In all other states and the District of Columbia, insurers can deny enrollment in Medigap, except when a senior starts on Medicare or when an applicant has a qualifying event, such as the loss of retiree health coverage, the report noted.