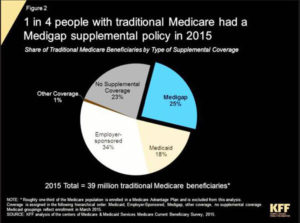 Source: Medigap Enrollment and Consumer Protections Vary Across States, KFF report, July 11, 2018.In 2015, 25% of people with Medicare had a Medigap supplemental policy.

Reading the news about COVID-19 vaccine distribution efforts in recent weeks, I learned that my home county of Barnstable (better known as Cape Cod) is the oldest in Massachusetts by residents’ age. The average age of the county’s 213,000 residents is 53.3 years — among the highest in the nation.

That fact helps explain why we see so many television advertisements for Medicare Advantage (MA) plans all day every day during certain times of the year.

Regardless of where these ads run, the problem for senior citizens is that the spots do not tell the whole story about MA. Like most advertisements, they highlight the good news and leave out the bad. Health care journalists have an essential role to play during enrollment season in reporting on how each eligible individual can choose the most appropriate Medicare coverage, despite the advice from aging celebrities on TV.

In a new AHCJ tip sheet on Medicare, we focus on MA and Medigap plans and how not all MA plans are suitable for all seniors. For example, MA plans might be inappropriate for seniors with high-cost health conditions because those plan’s out-of-pocket costs for deductibles, copayments and coinsurance are rising.

Seniors can protect themselves with a Medigap plan, but choosing the best one is complicated for two reasons. First, Medicare offers 10 Medigap plans, and second, selecting the most appropriate plan when a person is signing up late at age 64 or early at 65 requires predicting the future.

The initial Medicare enrollment period is when most people get Medicare Part A (for hospital coverage) and Part B (for physician care). This period starts three months before a consumer turns 65 and ends three months after turning 65. At this time, many seniors also choose a Medicare Advantage plan (Part C) and a prescription drug plan (Part D).

But once you choose a plan, changing from MA to Medigap could be costly in all but four states, as the tip sheet explains.

Consider what a senior, age 64, would do when preparing to enroll in an MA plan. Few seniors even consider the alternatives, in part because the ads are so compelling. At this age, the choices are traditional Medicare, which generally would pay 80% of all physician and hospital costs, leaving the remainder for the enrolled senior to pay. Unless these seniors have some other form of supplemental coverage, the choices are an MA or Medigap plan.

A KFF analysis in 2015 showed that about a third of the 53 million seniors in Medicare that year enrolled in MA plans. Almost all others had no additional coverage or supplemental coverage through their employer’s retirement plan or Medigap or Medicaid. About 1% had what KFF called other coverage.

Here’s a typical scenario involving a friend of mine in New Hampshire. Before he turned 65, he did his research into MA plans and chose one that required no monthly premium. One of the drawbacks of no-premium plans are high out-of-pocket costs. If he remains healthy, that plan could be sufficient for the rest of his life.

But what happens if, in a few years, my friend is diagnosed with a heart condition, cancer or another high-cost disease? Then, he’d be responsible for paying the high out-of-pocket costs for his no-premium plan.

He could try to switch to a Medigap plan, but New Hampshire (where the state motto is “Live free or die”) is one of 46 states that make it difficult for MA members to switch to Medigap plans.

As the tip sheet explains, seniors with pre-existing conditions who are on Medicare can be denied a Medigap policy in those states—except under certain circumstances. The situation is better in four states: Connecticut, Maine, Massachusetts and New York.

But in those other 46 states, your health insurer will underwrite your policy before you can enroll in a Medigap plan. Underwriting means the insurer would base your premium on your health history. If my friend has any pre-existing condition at that time, he may need to pay an even higher percentage of his health costs. The tip sheet offers details and a link to an example of what happened to one senior who faced such a problem when he sought to switch from MA coverage to a Medigap plan.