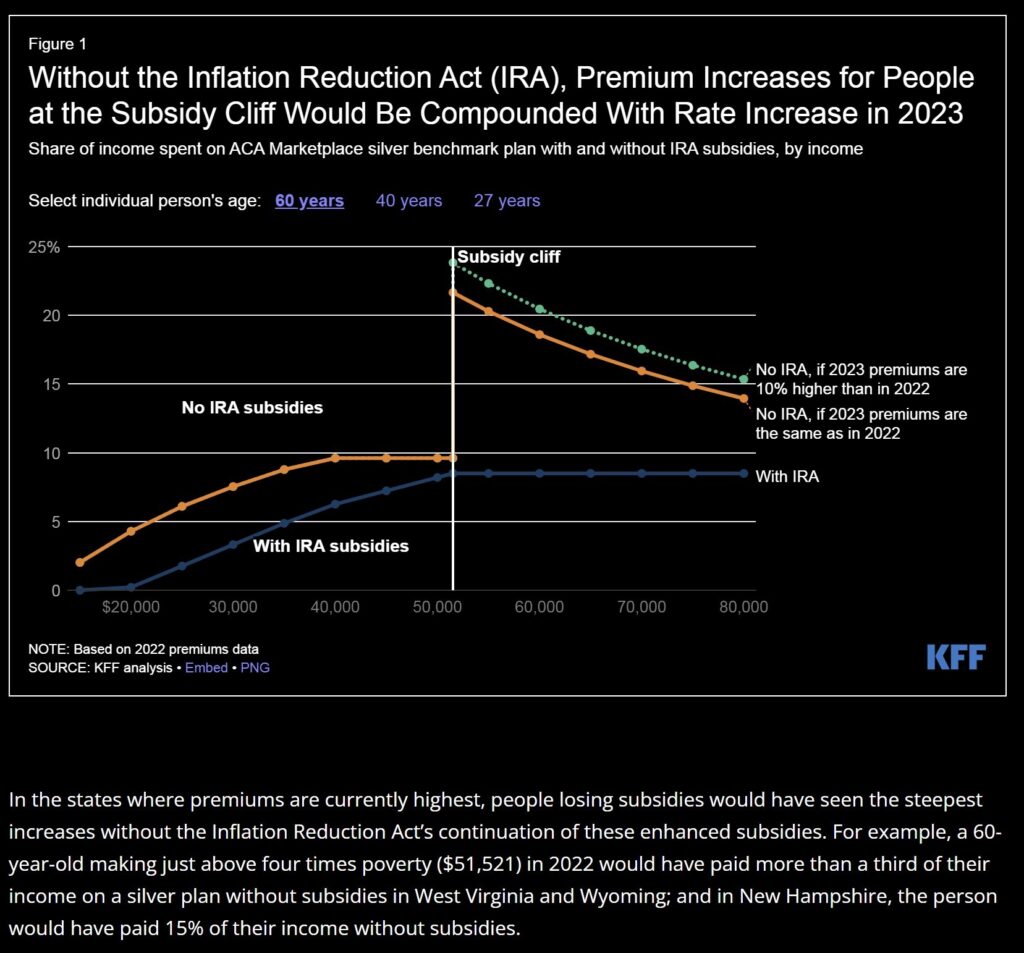 In states where health insurance premiums are highest, consumers losing marketplace subsidies would have seen the steepest increases if Congress did not pass the Inflation Reduction Act’s continuation of the enhanced subsidies. Source: “Five Things to Know about the Renewal of Extra Affordable Care Act Subsidies in the Inflation Reduction Act,” Kaiser Family Foundation, Aug. 11, 2022. Accessed Aug. 18, 2022.

By signing the Inflation Reduction Act (IRA) on Tuesday, August 16, President Biden made history by continuing a 12-year trend to reduce the number of nonelderly Americans without health insurance.

The IRA should continue that trend because it extends the health insurance premium subsidies included in the $1.9 trillion American Rescue Plan Act (ARPA) of 2021. The federal government offers those subsidies to consumers buying coverage on the state and federal marketplaces, making insurance more affordable for millions of Americans, as this blog reported last year.

The subsidies were due to expire at the end of this year however, meaning those millions of consumers would have faced the daunting challenge of paying much more for their insurance or looking for lower-cost plans.

Recognizing the need to extend those subsidies, Congress, extended those premium subsidies for three years (2023, 2024, and 2025). Also, the IRA allows the federal Department of Health and Human Services to negotiate with drugmakers, as my colleague Liz Seegert reported Tuesday.

For now, Congress has staved off a significant premium shock for millions of people at a time of record-high enrollment in marketplace coverage, as Katie Keith reported for Health Affairs.

In her article, Keith explained why the IRA makes a significant contribution to helping Americans afford health insurance. Among the 5.2 million people who gained health insurance coverage since 2020, some 2 million adults enrolled in marketplace coverage as a result of the changes included in the ARPA, she added.

For the past 20 years or more, millions of Americans lacked health insurance coverage. For example, the U.S. Census Bureau reported that the number of people who lacked health insurance in 2003 rose to 45 million nonelderly Americans. That was the largest number of uninsured people reported since the bureau began reporting on the number of uninsured in 1987 according to a report, “Number of Americans Without Insurance Reaches Highest Level on Record,” from the Center on Budget and Policy Priorities. In that report, CBPP noted that 15.6% of Americans — about one in six adults — were uninsured that year.

But in 2010, the number of Americans lacking health insurance rose to 46.5 million, or 17.8%, according to a report in 2020 from the Kaiser Family Foundation, “Key Facts about the Uninsured Population.” The year 2010 is significant because Congress passed and former President Obama signed the Affordable Care Act (ACA) on March 23, 2010. Over the next four years, various parts of the law went into effect until it became fully effective on January 1, 2014, when the marketplaces opened for business, providing premium subsidies for many enrollees.

As Keith explained, the IRA extends two significant enhancements to the premium subsidies that were available under the ARPA. First, ARPA expanded the availability of the subsidies (technically, premium tax credits or PTCs) to millions by eliminating what’s called the ACA’s subsidy cliff for consumers who make more than 400% of the federal poverty level (FPL). In the other enhancement, ARPA improved the subsidies available for those who already qualified for subsidies under the ACA because their income was between 100% and 400% of FPL.

Here’s how Keith explained how the ARPA eliminated the subsidy cliff. Individuals who made more than $52,000 annually and families of four that had income over $106,000 each year had income that was more than 400% of the FPL. “Individuals and families above this income level were not previously eligible for PTCs, leaving many middle-income people—especially those who are older and live in rural areas—with extraordinarily high premiums,” Keith wrote.

What ARPA did and the IRA continues through 2025 is that consumers whose income exceeds 400% of FPL are still eligible for PTCs if the annual cost of their insurance premiums is more than 8.5% of their household income, Keith explained. “This part of ARPA has had a significant impact: marketplace enrollment by middle-income consumers increased by 4 percentage points from 2021 to 2022, rising to a total of 1.1 million people,” she wrote. “By extending this policy through the end of 2025, the IRA will ensure that middle-income people who purchase their own health insurance do not pay more than 8.5% of their income toward premiums alone.”

Also, as mentioned, the ARPA raised the subsidies available for those whose income is between 100% and 400% of FPL, meaning they already qualified for ACA subsidies. Premium contributions increased as consumers’ income rose. But under the ARPA, those contributions were capped at no more than 8.5% of income for those with higher incomes.

These changes made PTCs more generous than what was available under the ACA, she wrote. Therefore, when enrolling for coverage this year, consumers shopping on the marketplaces saved an average of $47 to $128 each, and about 28% of all enrollees bought health insurance coverage for $10 or less each month, she noted.