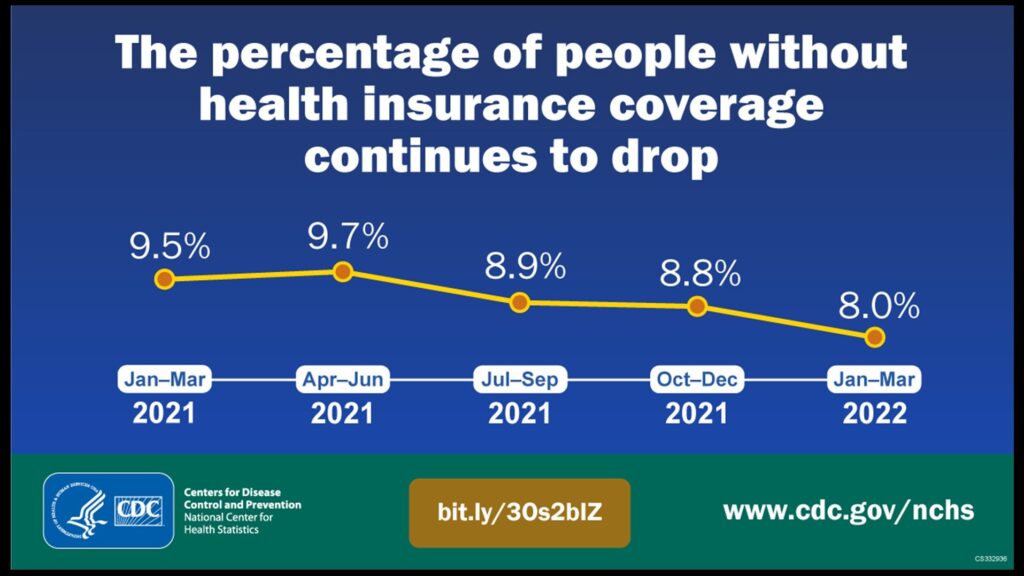 The percentage of Americans who lack health insurance hit an all-time low of 8% in the first quarter of this year, reflecting an increase of 5.2 million people who gained coverage since 2020, according to a report by the federal Department of Health and Human Services (HHS) released on Tuesday.

Using data from the National Health Interview Survey and the American Community Survey, the report from the HHS Assistant Secretary for Planning and Education (ASPE) shows the effect of better subsidies for health insurance that consumers buy on the Affordable Care Act’s marketplaces, increased federal efforts to encourage the uninsured to enroll, the continuous enrollment provisions in the federal-and-state Medicaid program and recent decisions in several states to increase enrollment in Medicaid, HHS said in a press release.

Since 2019, seven states have expanded enrollment in the federal-and-state funded Medicaid program, according to Louise Norris at HealthInsurance.org. Those states are: Virginia and Maine in 2019; Utah, Idaho, and Nebraska in 2020; and Oklahoma and Missouri last year, she wrote.

The HHS announcement is significant for three reasons. First, the all-time low 8% rate means that about 26.4 million people lack health insurance, down from 48 million in 2010, according to an ASPE report last year. Second, the report includes a table showing changes in the uninsured rates in each state for low-income adults ages 18 to 64 from 2018 to 2020. In 18 states (15 of which expanded Medicaid), the uninsured rates for this population dropped in those years.

Brandon Lee reported for Bloomberg Government that the reconciliation bill would extend federal subsidies for ACA premiums for three years (2023, 2024 and 2025). Those subsidies were due to end on Dec. 31, which would push ACA premiums up sharply and likely cause some consumers to lose coverage. The subsidies were enacted last year when Congress passed the American Rescue Plan Act, as we reported in a blog post in March 2021, “Resources for journalists on how the American Rescue Plan will reduce the number of uninsured Americans.” The ARPA included about $34 billion to fund what HHS called the ACA’s most significant expansion since Congress passed the law known as Obamacare in 2010.