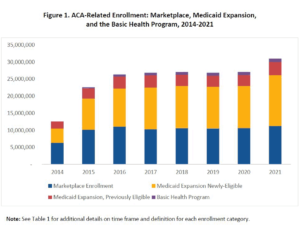 With just over a week to go in June, the Affordable Care Act has already had a very successful month in two important ways.

First, the ACA hit a record for enrollment, topping 31 million Americans since the law went into effect in 2014, according to a report the federal Department of Health and Human Services (HHS) issued earlier this month. And, second, the ACA survived a challenge at the U.S. Supreme Court, as we reported last week.

To reach that figure of 31 million, the HHS report included the 20 million who have gained insurance through the marketplaces under the ACA itself and through other ACA insurance programs.

While this news is welcome for more than 31 million Americans and their families, health care journalists still have a lot of explaining to help consumers avoid non-ACA-compliant health insurance plans. Health plans that do not comply with the ACA can leave the unaware with staggering medical bills as a report from 30 patient groups warned in March. (See “Warning from Patient Groups” below.)

“The enactment of the Affordable Care Act in 2010 was the largest expansion of coverage in the U.S. health care system since the passage of Medicare and Medicaid in 1965,” the HHS reported on June 5. Writing for The Washington Post, Amy B. Wang explained that as of February, some 11.3 million Americans were enrolled in ACA plans, and that as of December, about 14.8 million people had enrolled in Medicaid under the law’s rules that allowed 38 participating states and the District of Columbia to expand eligibility for the state-and-federal program.

In addition, 3.9 million Medicaid-enrolled adults benefitted from increased funding, improved outreach and simpler applications under the ACA; and 1 million Americans enrolled in Medicaid under the ACA’s Basic Health Program. This program was for some immigrants and those consumers whose incomes would have made them ineligible otherwise.

The eight-page HHS report, “Health Coverage Under the Affordable Care Act: Enrollment Trends and State Estimates,” will be useful for journalists because it explains how the HHS Office of Health Policy reached the 31 million figure and because it includes data on enrollment in each state through the ACA marketplaces (at www.healthcare.gov and in the states) and in Medicaid.

In a recent report, researchers representing 30 patient groups listed eight types of plans that fail to meet the rules of the ACA. As the report showed, non-compliant health plans are sometimes called junk insurance because they can leave unwary consumers with unpaid bills totaling thousands of dollars.

Not only do these plans expose consumers to significant financial risk and surprise medical bills, they also discriminate against consumers who have pre-existing conditions, according to the report, “Under-Covered: How ‘Insurance-Like’ Products Are Leaving Patients Exposed.” Moreover, non-ACA-compliant plans have weakened the ACA by segmenting the risk pool for the individual market and by inflating insurance premiums for those consumers who pay for comprehensive ACA-compliant coverage, the report said.

When seeking to help consumers distinguish between ACA-compliant and non-ACA-compliant plans, journalists have a difficult job because the only way for consumers to get comprehensive coverage that complies with all of the ACA’s rules is to enroll through the ACA marketplaces at www.healthcare.gov, which 36 states use. The 14 other states and the District of Columbia have their own state-operated marketplaces. (See this report from the National Academy of State Health Policy for details on how those 14 states and the District of Columbia have extended ACA enrollment periods.

Consumers shopping online outside the ACA marketplaces will find the nation’s health insurers and health insurance brokers offer ACA-compliant and non-ACA-compliant plans on their websites. While those sites should distinguish between the two types of plans, the distinction may be hard to discern.

For the 26-page “Undercovered” report, the researchers collected data on what is known about the most common kinds of non-compliant plans and makes recommendations for Congress, the administration, and state regulators seeking to add patient protections, particularly for those who have chronic health conditions.

The eight types of non-compliant plans examined in the report are:

The report is available from the Leukemia & Lymphoma Society.