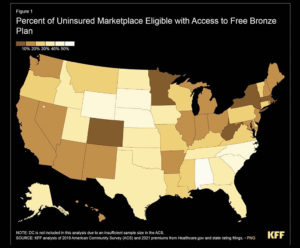 Source: Marketplace Eligibility Among the Uninsured: Implications for a Broadened Enrollment Period and ACA Outreach, KFF, Jan. 27, 2021.According to a KFF report on marketplace eligibility among the uninsured, more than half of the uninsured who could get a free bronze plan live in Texas, Florida, North Carolina, or Georgia. Other states with large shares of uninsured residents who could sign up for a no-premium bronze plan include Alabama, Nebraska, South Dakota and Wyoming.

On Monday, the Biden administration reopened the marketplaces for the Affordable Care Act for three months under a special open enrollment period.

As health care journalists we may want to consider the civic duty we have to explain some of the problems consumers are likely to face during this special enrollment period (SEP) through May 15.

One of our primary obligations may be to explain how consumers can avoid getting ripped off or being stuck with a health insurance policy that does not provide the full coverage consumers need. (See details below on how scammers have preyed on consumers seeking ACA-compliant coverage.)

Our reporting will be particularly important now because under the previous administration funding for ACA marketplace navigators was cut. Navigators help consumers determine their eligibility for coverage and guide them in choosing ACA-compliant plans.

But consumers may not have access to the enrollment assistance they need, as Stephanie Armour reported for The Wall Street Journal today. The navigators haven’t heard if they will get more funding, she wrote. For the SEP, navigators need more funding because they exhausted the federal grant funds they had during the ACA’s annual enrollment period, which ended Dec. 15, she added.

In 2017, the Trump administration cut funding for ACA advertising and outreach by 90% (from $100 million to $10 million), and cut funding for navigators by about 41% (from $62 million to $37 million, according to this report from the Center on Budget and Policy Priorities.

The Biden administration called for the 90-day enrollment period because of the pandemic’s effect on the economy, which led to layoffs, job losses and a corresponding loss of employer-sponsored health insurance. Since 2016, the number of uninsured Americans has risen, and researchers estimated that some 30 million Americans lacked health insurance in 2019, according to an article in NPR’s Shots blog today by Michelle Andrews of Kaiser Health News. Writing in Health Affairs in October, Katie Keith provided more detail on the number of uninsured in 2019 and 2020.

Rising numbers of uninsured Americans caused ACA supporters to call for an SEP. Now, the success of this enrollment effort may hinge on how well the federal government spends $50 million on a marketing campaign to increase awareness of the SEP, Armour explained.

For The Washington Post, Amy Goldstein reported that despite promising that $50 million in advertising, “the Biden administration has been slow to disclose details of its outreach strategy and is providing no assistance to community groups that coach consumers to sign up for coverage.”

We wrote about the SEP when Biden announced the news on Jan. 28. That same day, the federal Department of Health and Human Services said consumers in the 36 states that have marketplaces that use the HealthCare.gov site can submit new applications or revise applications for health insurance coverage for this year.

Coverage would be prospective, meaning it would be in force on the first of the month following the day a consumer chooses a plan, and consumers will have 30 days after submitting an application to choose a plan, according to a fact sheet, “2021 Special Enrollment Period in Response to the COVID-19 Emergency,” from the federal Centers for Medicare and Medicaid Services.

HHS is using the SEP to cast a wide net for those who lack health insurance or want to choose a different plan, wrote Louise Norris, a health insurance broker in Colorado who reports for HealthInsurance.org. Currently enrolled consumers can change without restriction to any available plan in their area as long as they choose the same level of coverage as they have in their current plan, she added.

What’s more, consumers will not need to provide documentation for what the ACA calls a qualifying event such as a job loss or birth of a child, Norris explained. Typically such documentation is needed.

Journalists have a role informing consumers

During open enrollment, health insurance navigators are needed not only to answer consumers’ questions about eligibility and enrollment, but also to steer consumers to plans that comply with the ACA. This is where health care journalists can provide a needed service to consumers.

On Covering Health, we covered this topic during the earlier enrollment period, “During open enrollment, consumers will need help recognizing plans that comply with the Affordable Care Act.”

Since 2017, the Trump administration has loosened the restrictions on short-term health insurance policies, as Zeke Faux, Polly Mosendz and John Tozzi explained in an article for Bloomberg Businessweek. As they explained, the ACA bars insurers from capping coverage, canceling policies retroactively or failing to insure consumers who have preexisting conditions. But short-term health plans are exempt from these rules, and the Trump administration stretched the definition of “short-term” from three months to a year and allowed consumers to renew such coverage for as long as three years.

For consumers who do not need full health insurance coverage, plans that do not comply with the ACA are attractive because the premium payments may be lower than fully compliant plans, they added.

Last month, Kelli Kennedy covered this topic for the AP, in an article, “Critics: consumers should be wary of short-term health planslast.” For The Philadelphia Inquirer, Sarah Gantz explained how easy it is for consumers to be confused in an article, “Pa. woman was convinced she bought Obamacare insurance. She got scammed by a look-alike website,” published in 2019.

Last year, we covered the problems some consumers face after they bought short-term, limited duration insurance plans (STLDI). In one blog post here, actuaries reported on the problems they’ve seen with STLDI plans, and in another blog post here, we wrote about a report from Democrats in the U.S. House of Representatives on problems with STLDI coverage.

Last week, the Center on Health Insurance Reforms at the Georgetown University Health Policy Institute reported on how the Federal Trade Commission could protect consumers from deceptive advertisements and marketing of STLDI plans and other forms or non-ACA compliant coverage. In the report, “FTC’s Opportunity to Protect Consumers from Deceptively Marketed Alternative Coverage Arrangements,” Assistant Research Professor Maanasa Kona estimated enrollment in STLDI coverage at about 3 million Americans and explained that about 1 million consumers are in health care sharing ministry plans, another form of coverage that does not comply with the ACA.