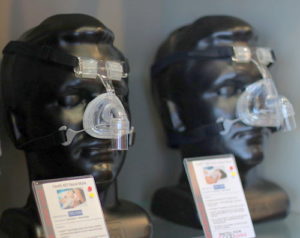 Obstructive sleep apnea (OSA) is a common and costly medical condition leading to a wide range of health risks such as cardiovascular disease, stroke, depression, diabetes and even premature death.  Medical costs are substantially higher among older adults who go untreated for the disorder, according to a recent study.

Health costs among older adults for untreated OSA – which occurs when the upper airway closes off during sleep, temporarily interrupting breathing—will continue to rise without more early detection and treatment, researchers cautioned. But many people are resistant to participating in sleep studies, which require an overnight stay in a sleep lab, and treatment compliance is notoriously poor.  As this story in Medscape notes, “evidence indicates that many patients do not accept (or even initiate) CPAP therapy and that up to 25 percent do not regularly follow up with a sleep physician, with most of these patients being nonadherent to therapy.”

Sleep disorders represent a massive economic burden on the U.S. health care system, according to Emerson Wickwire, Ph.D., associate professor of psychiatry and medicine at the University of Maryland School of Medicine and director of the Insomnia Program at the University of Maryland Medical Center. Wickwire, who was the principal investigator of the study, said economic aspects of diseases increasingly are recognized as important drivers of health decisions by patients, those paying for services, policymakers and ultimately taxpayers.

“We conducted the largest economic analysis of sleep apnea among older adults to date,” he said. “Medicare beneficiaries with obstructive sleep apnea cost taxpayers an additional $19,566 per year and utilized more outpatient, emergency, inpatient, prescription, and overall health care services. It’s important to realize that costs associated with untreated sleep disorders are likely to continue to accrue year after year, which is why our group focuses on early recognition and treatment.”

OSA affects an estimated 20-30 percent of all adults. However, up to 70 percent of elderly nursing home residents have OSA, placing them at higher risk of death according to the study.  A 2018 study by University of Michigan researchers found evidence that more than half (56 percent) of people 65 and older have a high risk of OSA. Yet, only 8 percent of these individuals have been tested. If left untreated for even a few days, sleep apnea can increase blood sugar and fat levels, stress hormones and blood pressure, according to experts at Johns Hopkins.

For this investigation, researchers reviewed a national, random 5 percent sample of Medicare administrative claims data for years 2006–2013. They measured the health care costs over a year among Medicare beneficiaries who were 65 and older and ultimately were diagnosed with OSA. They found that patients who went undiagnosed with OSA over a 12-month period had more doctor’s appointments, emergency room visits, and hospital stays before being treated for the disorder. These patients, on average, had nearly $20,000 more in costs a year than those who were diagnosed and treated for OSA, the research found.

Researchers also observed that Medicare patients with OSA were more likely to suffer from comorbidities compared with individuals without the sleep disorder. For example, OSA is linked to an increased risk for high blood pressure, diabetes, heart disease, stroke and depression. The study authors suggest that insurers, legislators, and health systems leaders consider routine screening for OSA in older patients, especially those with medical and psychiatric comorbidities, to contain treatment costs better.

A report from the American Academy of Sleep Medicine estimated that undiagnosed OSA among U.S. adults costs $149.6 billion annually. While the report projected it would cost the health care system nearly $50 billion to diagnose and treat every American adult with OSA, treatment would produce savings of $100 billion. The study appeared in the January 15 edition of the Journal of Clinical Sleep Medicine.