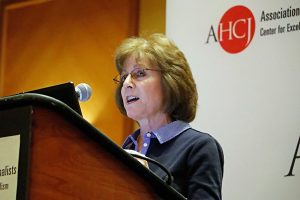 Photo: Deborah Crowe/AHCJMeals on Wheels America CEO Ellie Hollander talked about the benefits of the program beyond providing nutritious meals.

Ellie Hollander wants to see every older adult live out their lives independently, in their own homes. But, the president and chief executive officer of Meals on Wheels America acknowledges that it may be an impossible goal, given the overwhelming need and current political climate.

Hollander was the speaker at the AHCJ Awards Luncheon on Saturday, April 22, at Health Journalism 2017, where she spoke about the overwhelming need to address senior hunger in the United States.

About 2.4 million homebound seniors and disabled adults receive a nutritious meal daily, thanks to the Meals on Wheels network of about 5,000 independent community-based programs. Volunteers and staff deliver over 1 million meals daily (and about 218 million meals annually) to homes, group or congregate settings. Each local program is unique, Hollander told the packed ballroom in Orlando, but they share the same mission: “nourishing lives, enabling independence, safety, and health in the home, and out of institutional settings.”  She explained that Meals on Wheels America is the umbrella organization, representing the Meals on Wheels community. They provide leadership, evidenced-based research, advocacy, education, training and outreach campaigns.

Those who receive Meals on Wheels services are the ones making daily tradeoffs between paying rent, paying their utilities, paying for prescription drugs or eating, according to Hollander. “These are the highest-need, highest-risk, highest-cost individuals.”

They are the 20 percent representing 80 percent of health care costs and are “the folks in the greatest social and economic need.” The grim statistics about their clients’ physical and mental health, their ongoing struggle with activities of daily living, and the tragedy of social isolation, make their local Meals on Wheels program a lifeline.

But that’s only the tip of the iceberg. According to The State of Senior Hunger in America, 2015, the unfulfilled need for Meals on Wheels hovers around 10.2 million — meaning there are about 8 million hungry seniors without a regular source of daily meals. Waiting lists for local programs have as many as 4,400 people on them. Some programs no longer even keep lists, Hollander later told me, because “they don’t want to give out false hope.” Gaps in need were recently reinforced by a General Services Administration Report, calling for a new federal strategy to ensure efficient and effective home and community based supports — among them, meals for homebound older adults.

According to Hollander, Meals on Wheels can provide a senior with food for an entire year for the same cost as one day in the hospital or 10 days in a nursing home. “My concern is that if we can’t find a way to bridge the gap against this exponentially increasing demographic shift what we have, with seniors who have multiple chronic conditions, and it is an epidemic, our health care costs are just going to escalate and escalate, and they’re already out of sight now,” she said. 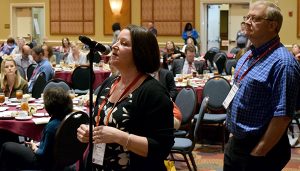 A major program element focuses on alleviating social isolation. Delivery people are often the only human contact a homebound senior has all day. In a 2015 randomized trial, participants who received home delivered meals reported fewer hospitalizations, fewer falls and greater improvements in their sense of loneliness and depression compared with a control group. Hollander compared the health impact of social isolation with smoking 15 cigarettes a day. Isolation also boosts risk of heart disease, stroke and high blood pressure.

Then, there’s the safety check. Delivery people are the “eyes and ears” to ensure a person’s home is safe for them to live in. Scatter rugs, loose bannisters or wobbly furniture are accidents waiting to happen.  Many Meals on Wheels programs can take care of minor repairs, and others can even handle major improvements like installing a wheelchair ramp, with the goal of ensuring people are as safe as possible at home. If they can’t do the repair, local staff will connect recipients to other community services that can help.

Because volunteers are in a person’s home daily, they are often the first to notice changes in someone’s condition and will notify an emergency contact or call emergency services if necessary. “This brings peace of mind to the senior and to the loved one who may not live close enough to check on parents or grandparents daily,” Hollander said. That need was brought to life through two brief video clips, where the audience met Ms. Mack, and Sydney, two Meals on Wheels recipients who described how much the program and delivery person meant to each of them.

But the safety net, which relies on a combination of funding from the Older Americans Act, state and local sources, private donations and several federal grant programs, is under attack. As previously reported, the Trump Administration’s proposed “skinny budget” completely eliminated two block grants. They also proposed reducing the budget for the Department of Health and Human Services by 17.9 percent. That’s the source of Older Americans Act funding, which pays for 35 percent of Meals on Wheels programs.

HHS also implements another grant, the Social Services block grant, which 16 states rely on to fund home-delivered meals, and another 10 states use to support congregate meal delivery. “Not only will this mean serious impacts on Meals on Wheels programs, but more importantly on the seniors they serve,” Hollander said. “We’re going to be seeing fewer meals served and fewer seniors being served in an extremely vulnerable population where we know the need is greater than ever.”

The only good thing about the proposed budget cuts is the renewed attention it brought to the importance of the program. The national organization and local programs received a record number of donations in a two-week period and saw a huge uptick in volunteerism. “It’s obviously a clear signal that people are paying attention and listening and want to do something about it,” Hollander said.

In a recent Washington Post op-ed, Hollander invited President Trump to take a ride with a volunteer and see the power of the program for himself. She isn’t optimistic that it would actually happen. However, doing a Meals on Wheels run would be the singular best way for members of the administration and Congress to experience the life change that this program is making through the eyes of the beholder, Hollander said. While some members of Congress actually do volunteer, she thinks everyone should, at least once.

Hollander said this is one item on her wish list. Other major aims are for health providers to gain the ability to write a prescription for people who need a nutritious meal, and that Medicare and Medicaid should cover the expense.

She would also like to see more reporters go on meal runs. “The best stories I’ve read have that human touch, and really draw you in,” she said, citing Anna Gorman’s reporting for Kaiser Health News as an example.

Unfortunately, Hollander said, whether you’re in Santa Monica or Des Moines or the Bronx, the challenge is the same. The program might look a bit different in each community, but the need of the person behind the closed door is universal.

Meals on Wheels has fact sheets about every state to connect with local programs and find out what’s happening in your backyard.