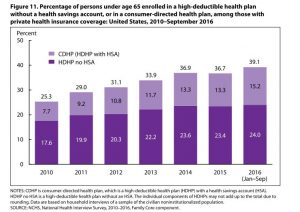 A report released today by the National Center for Health Statistics indicates that the uninsured rate among Americans of all ages was 8.8 percent in the third quarter of 2016.

The report shows that in the first nine months of last year, 28.2 million Americans remained uninsured, and this number was 20.4 million fewer than those uninsured in 2010, the year Congress passed the Affordable Care Act (ACA).

However, the number counted were 400,000 fewer than the 28.6 million Americans who were uninsured in 2015, a difference that NCHS said was not significant. The figures for this report come from the National Health Insurance Interview Survey.

A separate Gallup report released Feb. 8 said six states had reduced the uninsured rate by 10 percentage points or more, and in no state had the uninsured rate risen since 2013. (Remember that the ACA became effective in 2014.) Not surprisingly, the states that expanded their Medicaid programs under the act experienced the largest reductions in the uninsured rate, Gallup said. The rate of uninsured Americans dropped nationwide from 17.3 percent in 2013 to 10.9 percent in the fourth quarter of 2016, Gallup reported. The source of the Gallup data is the Gallup-Healthways Well-Being Index.

These two reports are significant because the success of any plan that Congress and the Trump administration implement to replace the ACA will be measured against these numbers and any subsequent reports on the uninsured rate. The NCHS data are useful because the report estimates rates of public and private insurance coverage and coverage through the ACA’s Marketplace exchanges. It also offers valuable data on the enrollment in high-deductible health plans (HDHPs) and consumer-directed health plans (CDHPs). A CDHP is an HDHP with a health savings account (HSA).