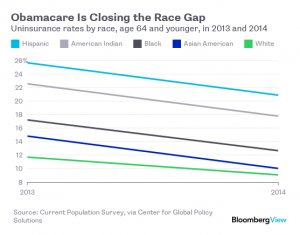 Chris Flavelle of Bloomberg View points out an unheralded achievement of the Affordable Care Act: It’s narrowing the race gap in health insurance.

In a recent opinion column summarizing research on insurance disparities and the ACA by Algernon Austin at the Center for Global Policy Solutions, Flavelle wrote:

“In 2013, the year before most of the law’s provisions for subsidized insurance took effect, non-elderly blacks were 47 percent more likely than whites to be uninsured. For American Indians, that figure was 93 percent; for Hispanics, 120 percent.

He added that the gap closed completely for blacks and white age 18 and younger.

Disparities still exist – and one reason they aren’t closing faster is that about 20 states still refuse to accept federally financed Medicaid expansion under the ACA, which would help low-income minorities.

Flavelle speculates about why the Obama administration doesn’t publicly celebrate the health law’s achievements in race – and wonders if pointing that out might further dampen its already tepid support. “In that sense, not harping on race might be good strategy,” he writes. “Maybe the country’s fraught relationship with race means the only way to close the gap in health insurance is, in effect, by stealth.”