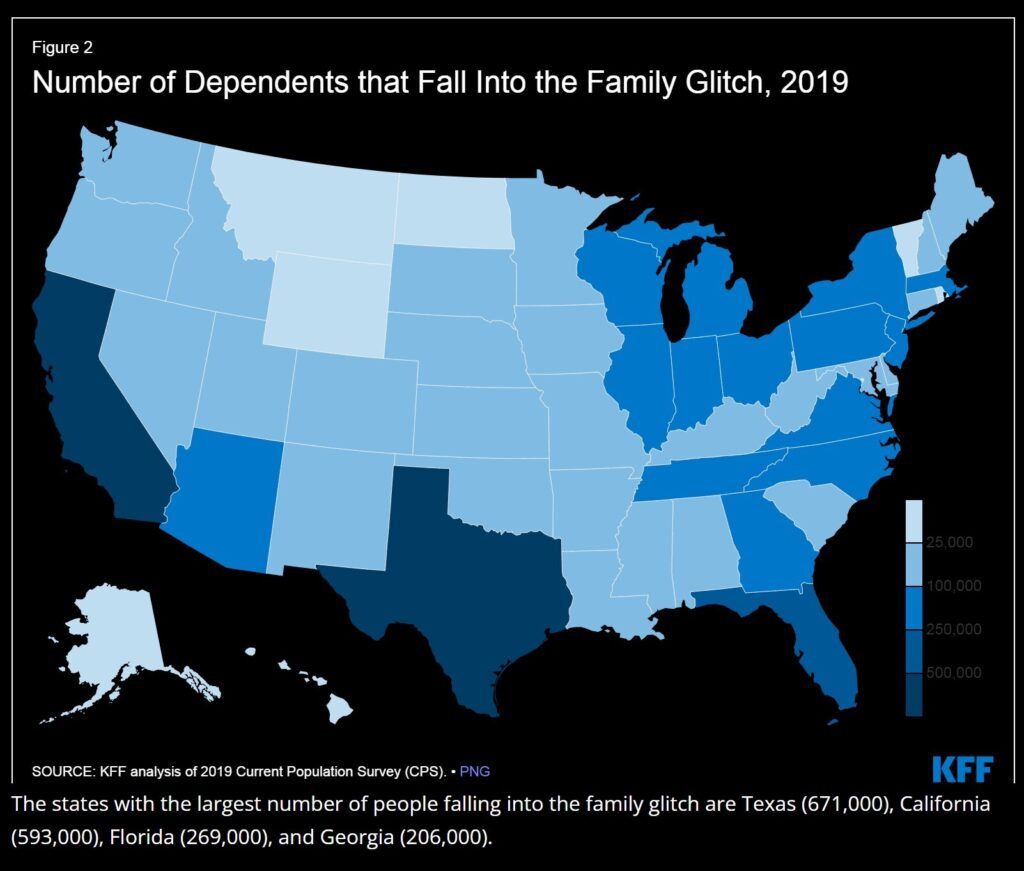 This map online is interactive, meaning journalists can click on a state to see the number of residents who are in the family glitch. Source: Kaiser Family Foundation report, “The ACA Family Glitch and Affordability of Employer Coverage,” published April 7, 2022.

On Tuesday, the Internal Revenue Service issued a rule designed to eliminate the so-called “family glitch” in the Affordable Care Act (ACA) that made employer-based coverage unaffordable for many families.

When reporting on this rule change, the Associated Press got it right, summed it up like this, “Families who get expensive health insurance through employers could see a price break if they sign up instead for coverage through the Affordable Care Act marketplace this fall.”

In April, the Kaiser Family Foundation estimated that about 5.1 million Americans fall into the family glitch in three groups: dependents in families that have employer-sponsored health insurance, people who have individual coverage through the ACA’s marketplace and those who are uninsured. The KFF report on the family glitch is, “The ACA Family Glitch and Affordability of Employer Coverage.”

The new rule will allow people and families to gain coverage, or their insurance will be more affordable, according to a statement from President Biden. “This marks the most significant administrative action to implement the Affordable Care Act since the law was first put into place,” he added.

Technically, the new rule amends regulations on eligibility for the ACA’s premium tax credit (PTC) also called the advanced premium tax credit (APTC). The new rule affects taxpayers who enroll themselves or family members in health insurance coverage through the ACA’s marketplaces and who are eligible for a PTC, the IRS said. The rule will be in effect 60 days after the rule is published in the Federal Register, meaning it will affect what families pay for coverage effective on January 1, 2023.

Since the ACA went into effect in 2014, families with employer-sponsored health insurance were eligible for a PTC if they paid more than 9.5% of their income toward their monthly premiums and then decided to save money by ditching their employers’ plan and buying a plan in the ACA marketplace instead. But the IRS based the 9.5% calculation on the cost of the employer’s coverage for a single person, instead of calculating the cost for a more expensive family plan. As a result, many families did not qualify for a PTC, the AP explained.

At Health Affairs, Katie Keith had a thorough explanation of the new rule, including details about some of the groups and individuals who submitted comments on the rule change after the IRS proposed the new regulation on April 7. Many of the comments the IRS received are likely to be from people who may be willing to talk to journalists about their problems finding affordable health care coverage. Here’s a link to the site at Regulations.gov where the IRS published all 3,896 comments.

Another source for journalists seeking families and people who would comment would be those groups that supported the rule, including the American Cancer Society Cancer Action Network, the American Academy of Pediatrics, the Children’s Hospital Association, America’s Health Insurance Plans and the National Association of Insurance Commissioners. Keith noted that many of the comments supporting the rule came from families, including one featured on the Tradeoffs podcast who testified about their experience with unaffordable job-based family coverage.

Among the groups that opposed the new rule were the U.S. Chamber of Commerce, the Galen Institute and the Council for Affordable Health Coverage (CAHC), she wrote. Reporters should note that CAHC describes itself as “a broad-based advocacy alliance with a singular focus: bringing down the cost of health care for all Americans.”

Keith wrote, “Perhaps anticipating litigation, the IRS provided additional discussion about the statutory basis for its revised interpretation and the need for consistent interpretations across IRS rules.”

In its report, KFF explained that among those people in the glitch, more than half are children under age 18 who do not qualify for enrollment in the Children’s Health Insurance Program. And about 500,000 people in the family glitch are ages 18 to 26, and of those adults in the glitch who are over age 18, most are women, KFF noted. Texas leads the nation among states with the largest number of people in the family glitch (671,000), California (593,000) is second, Florida (269,000) third and Georgia (206,000) if fourth, KFF added.

In a statement, Xavier Becerra, secretary of the federal Department of Health and Human Services noted that since Biden took office last year, the nation’s uninsured rate has reached an all-time low and enrollment under the ACA has hit an all-time high.

When Congress passed the ACA in 2010, the number of consumers without health insurance hit a historic high of 48 million Americans (17.8% of the population). But since then, that number has dropped, hitting a historic low of 26.4 million Americans under age 65 (8% of the population) in the first quarter of this year, as this blog reported in August here, here and here.