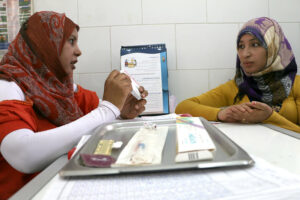 The report comes as the nation’s mental health care system continues to struggle to meet many goals of the Mental Health and Addiction Equity Act, passed in 2008 to expand the Mental Health Parity Act of 1996.

Amid current bipartisan efforts aimed at shoring up that system, how to build and adequately compensate a lay workforce of community health workers and peer, support specialists, is a question that increasingly comes up, said public health researcher Ryan McBain, Ph.D., M.P.H.

A co-author of the Rand report, McBain said that just a handful of health systems are modeling how to move forward while keeping their bottom lines in the black. He cited four — California-based Kaiser Permanente, Maryland-based Sheppard Pratt Health Systems, Pennsylvania-based Geisinger Health System and the Veterans Health Administration — whose integrative health care models position community health workers or peer support specialists as key players in keeping people with mental illness out of emergency rooms and in longer phases of overall wellness.

“There are more psychiatrists in one corridor of Mass General Hospital in Boston than the whole of Zimbabwe,” he said, citing the training, for example, of Zimbabwe’s female elders as community health workers. He showed a photo of a grandmother counseling a mother with postpartum depression while the two sat on a park bench.

“The grandmother is delivering problem-solving therapy, a brief form of cognitive-behavioral therapy,” he said, adding that expanding the lay workforce by that and other measures “ … is allowing us to redefine mental health care in fundamental ways.”

Starting in 2022, Patel, also co-founder of the Movement for Global Mental Health, the London School of Hygiene & Tropical Medicine’s Centre for Global Health and a mental health-focused nonprofit organization in his native India, will help develop a community-health worker network in Texas based on Harvard University’s Empower model of expanding the global mental health workforce. A $10 million Lone Star Prize will finance Patel’s work alongside the University of Texas Southwestern Medical Center’s Center for Depression Research and Clinical Care and The Path Forward for Mental Health and Substance Use.

Apart from the outcomes shown at the handful of institutions already using community health workers, U.S. health care executives in the main still aren’t convinced they can recoup the costs of hiring such workers, McBain said.

“There is this odd disconnect between supply and demand. You’d think if the demand was high, payment would increase as a function of that. The challenge in our system is that people rely on their health insurance and health insurance seldom covers peer support workers or community health workers and the like,” said McBain.

It’s a good sign that Biden has been pushing for better pay and work conditions for home health aides, a chronically underpaid and often exploited class of employees, McBain added. He is hoping that that initiative signals similar future support for paying community-health workers and peer-support specialists.

Also, McBain said, several previous and ongoing lawsuits are driving some shifts in mental health care. Momentum is growing for standardized assessments of which mental and behavioral health services are appropriate and how to pay for them.

“A federal judge in California said, ‘You must re-process 50,000 medical claims for psychiatric and behavioral care,’” McBain said, referring to the results of a 2018 class-action lawsuit, initially filed on behalf of a woman with PTSD. United Healthcare, her insurer, had reduced by 35% the amount it would pay for the out-of-network psychotherapist who provided her care.

The most recent amendments to that case, Smith vs. United Healthcare, were made in May 2021. “It’s a big deal,” McBain added, “because it sets a precedent for many health systems: “Geez, if I can get sued?”… Suddenly the financial incentives [for reform] look quite different.”

Thus far, in recent years, similar lawsuits have been filed in at least 23 states, according to McBain’s spreadsheet tracking those court proceedings.

Those sued states include Mississippi, where recently filed state legislation, if approved, would order mental health practitioners to assess patient needs through “level of care utilization system” (LOCUS) measures. LOCUS is a tool that aims to funnel patients into more precise, best outcomes-driven care than tends to be extended to patients in Mississippi, where a disproportionate tally of the low-income Medicaid recipients wind up, for example, in costlier state-run psychiatric hospitals, rather than community-based endeavors considered a better, cheaper model of care.

“It hasn’t passed,” McBain said of that pending Mississippi legislation. “But it’s a sign that a state we’ve considered to be more free-market friendly and conservative, with a different outlook on what the role of government should be … also recognizes the need for major reforms,” he said. “It’s exciting to think about what’s possible.”