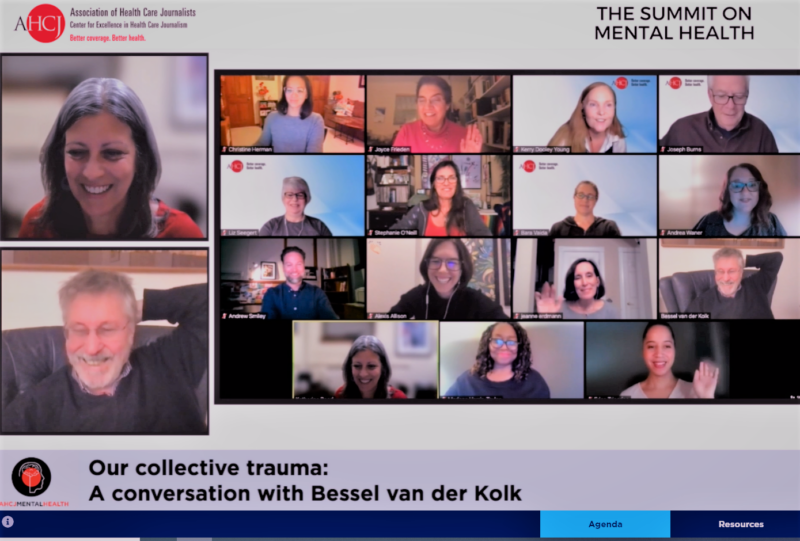 AHCJ wrapped up its first-ever Summit on Mental Health on Thursday night, with speakers highlighting the strain the pandemic placed on many Americans — especially the young — and  spotlight speakers outlining solutions to a mental health care system that leaves many people’s needs unaddressed.

The summit featured three spotlight speakers who emphasized the gravity of the mental health situation and the barriers to care, why traditional treatments aren’t working, and what is being done in Congress to help fix what keynote speaker Vikram Patel, M.D. called a broken mental health system. “It is failing,” Patel told attendees, as he presented data that showed that in spite of massive U.S. spending on mental health care, key measures show no improvement and/or a decline in Americans’ mental health.

Patel presented his vision for a community-based approach to care that teaches lay people to provide short-term intervention in places — including in the U.S. — where mental health care is scant or non-existent.

Spotlight speaker Bessel van der Kolk, M.D, a psychiatry professor and founder and medical director of the Trauma Center in Brookline, Mass., and author of the New York Times bestseller, “The Body Keeps the Score,” spoke earlier in the week in a similar vein. “Our diagnostic system is in a shambles,” he said during a Q&A session on Tuesday. Despite advances in the psychotherapeutic drugs, he said, data show there are more depressed people now than there were in 1972. “We need to really explore how we can change the mind,” said van der Kolk, whose work focuses on addressing trauma through the body.

Rep. Katie Porter, a member of the U.S. House of Representatives, 45th District, the spotlight speaker on Wednesday, talked about a particular aspect of the U.S. mental health care system that is desperately in need of change — the intersection between mental health and the criminal justice system.  She talked about the promise of the recently introduced Mental Health Justice Act, a bill that would create mental health responders who can be dispatched in a mental health crisis rather than involving law enforcement whose interventions too often result in injury or death for people struggling with mental illness.

A glance at a few panels

The summit, sponsored by the Icahn School of Medicine/Mount Sinai, was packed with sessions covering a wide range of topics from maternal mental health and the use of psilocybin and MDMA in PTSD and other situations to burnout among nurses and physicians and the promise of mental health technology.

Here are just a few highlights.

Iola Kostrzewski, a doula in Minnesota told participants on Tuesday that mental health conversations need to occur before “you have that pregnant person sitting before you. We need to culturally address these issues after this person has given birth.” She also explained the significant role doulas play in advocating for patients, especially women or people of color, who are more likely to die during childbirth than their white counterparts.

During her presentation on Wednesday about nurse burnout and compassion fatigue, Desiree Shin, a practicing ICU nurse talked about the shame she felt culturally and professionally for taking a month off to address her mental health needs. “There was this overwhelming feeling of helplessness,” she said, adding that she couldn’t sleep, was severely depressed and anxious One panelists explained how hospital debriefings have allowed nurses to unpack critical incidents, traumas staff had experienced, and adverse events in a compassionate form.

On Thursday, the last panel of the summit shed light on promising research on substances such as psilocybin (aka “shrooms” or “magic mushrooms”) and MDMA (aka “Molly” or “ecstasy”) as potentially powerful therapeutic tools for treating mental health conditions including PTSD, anxiety, and depression.

“There is a lot of hope and anticipation that the psychedelics’ treatment model may have something to offer the mainstream of mental health care delivery,” said Charles S. Grob, M.D., professor of psychiatry and pediatrics at the U.C.L.A. School of Medicine and director of the division of child and adolescent psychiatry at the Harbor-U.C.L.A. Medical Center, adding while these medications may only be for a select group of people, researchers are adhering to strong safety parameters.

“This medicine has remarkable potential and we might be able to explore its application to a degree that its predecessors generations ago did not have.”

To check out the full list of recordings, detailed summaries and photos of each session, visit AHCJ’s “recorded sessions” webpage.