AHCJ board member Tony Leys has been the Des Moines Register’s main health care reporter since 2000. He was a 2011-12 AHCJ Regional Health fellow, and he has reported from Haiti, Afghanistan, Guatemala, Uganda and Mali.

View all posts by Tony Leys → 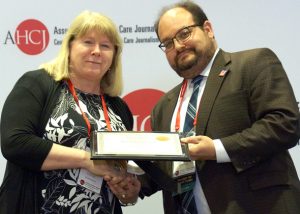 It’s fall, that magical time of year when the leaves turn, the pumpkin-spice debate rages – and health care journalists start gathering their best stories from this year.

Entries are now being accepted in nine categories, including beat, investigative, public health, and student. The big news this year is we’ve added an audio category to recognize the great health journalism being done for radio and podcasts.

Rules, category descriptions and entry instructions are posted at https://healthjournalism.org/awards. People organized enough to take advantage of it can get a discount on the fee by submitting their entries before the early-bird deadline of Dec. 15. Procrastinators have until the final deadline, which is 5 p.m. Eastern Time on Jan. 26. (Please don’t claim two hours and 59 minutes later that you thought we meant Pacific Time.)

First-place winners earn $500 and a framed certificate. They also receive free registration for AHCJ’s annual conference and complimentary lodging for two nights at the conference hotel.

Hundreds of journalists enter the contest each year. Their work is reviewed by volunteer judges who work in pairs to make difficult calls about which stories are the best. Several dozen folks have offered to help judge the contest this winter, but we’re always looking for more help. If you’re a current or retired journalist or journalism instructor and willing to serve as a judge, please email contest chair Tony Leys at tonyleys01@gmail.com.

Judges are allowed to enter their own work in the contest, but they will be assigned to judge a different category.

Members of the AHCJ board and contest committee are not allowed to enter their own work or to serve as judges. However, the board decided this fall that reporters may enter pieces on which a board or committee member served as an editor or producer. In such cases, that board or committee member can’t help choose which stories to enter. Their names can’t appear on entries, and they can’t share in any prizes.

We expect to announce the winners in March. And we plan to applaud heartily as they pick up their plaques and checks during the awards luncheon at our conference in Austin in late April.

AHCJ board member Tony Leys has been the Des Moines Register’s main health care reporter since 2000. He was a 2011-12 AHCJ Regional Health fellow, and he has reported from Haiti, Afghanistan, Guatemala, Uganda and Mali.