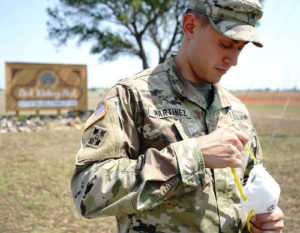 Health care issues in the military are becoming increasingly important to uncover, especially as the nation watches the response to the pandemic. At the same time, reporters may find it challenging to dig into this niche and understand what to cover.

Freelance journalists, in particular, may face difficulties in approaching sources and obtaining documents. Experienced health care reporter Patricia Kime has focused on these issues during her career, and continues to tackle them as a self-employed writer. END_OF_DOCUMENT_TOKEN_TO_BE_REPLACED

TVWeek special correspondents Debra Kaufman, Allison J. Waldman and Elizabeth Jensen all contributed stories to the magazine’s in-depth coverage of health journalism, AHCJ and Health Journalism 2009. The 20-story package touches on just about every facet of the profession, from discussions of the economic state of health care journalism to profiles of AHCJ award winners and prominent television health care journalists.

Many of the stories print a grim picture of the profession’s future and present. From Under the Knife: Despite Increased Interest in Medical Issues, Media Outlets Are Cutting Health Care Coverage:

A March report to the Kaiser Family Foundation, “The State of Health Care Journalism” by Gary Schwitzer, associate professor at the University of Minnesota School of Journalism and Mass Communication, reveals the extent of the damage.

The report was based on a review of published research on health journalism and a survey of almost 260 AHCJ members conducted by KFF and AHCJ, as well as Mr. Schwitzer’s one-on-one interviews with more than 50 journalists who work (or worked) for TV stations, newspapers, radio, magazines or Web sites.

Mr. Schwitzer reported that the average length of TV news pieces is dropping below 45 seconds. Nine out of 10 journalists said bottom-line pressure is “seriously hurting the quality of health news coverage” and 39% said it was very likely or somewhat likely their position would be eliminated in the next three years.

At the same time, the report also showed that the news hole for TV health journalism—between 7% and 11% of airtime—has remained stable over the last 10 years. In fact, twice as many journalists (38%) said the amount of health coverage had increased as said it had gone down (18%).

On the bright side, AHCJ Board of Directors President Trudy Lieberman believes the AHCJ 2009 conference in Seattle will help members, many of whom have lost their jobs, adapt to the changing market for health care journalism.

She believes panels at the conference on topics such as learning multimedia tools—social networking, blogging your beat, getting and using audio for Web reports, free online tools for better storytelling—will be as valuable as the myriad of health and medical stories that attendees can take home to report.

Other stories of interest