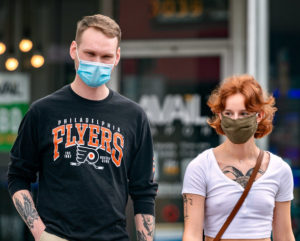 Reporting feature stories about COVID-19 and its impact on Americans is more critical and more challenging than ever.

These stories usually would involve dozens of hours of in-person interviews; something journalists won’t be able to do for many months to come. What kinds of stories should we tell in our communities and how can we report them?

Jessica Contrera, a writer for the local enterprise team at The Washington Post, has some ideas for journalists, including tips on reporting from a distance, getting people to open up and tell their stories in detail and interesting angles to explore.

In 2020, she wrote a series vividly illustrating Americans’ stories working in the food industry, health care and adult daycare.

“Our starting point was to write about the ways in which this pandemic was impacting people differently, depending on their circumstances,” Contrera wrote in a new How I Did It essay for AHCJ. “At the time, I was thinking a lot about N95 masks because my Mom is a nurse. So, I decided to pursue a story that followed a single N95 mask, and that turned into a project about how can we write about important objects connected to the pandemic. I (also) followed a piece of beef and a canister of Clorox wipes.”

Among her stories was: “The lives upended around the $20 cheeseburger,” which describes the human toll of COVID-19’s disruption to the food supply, restaurant, and service industries; another was: “The N95 shortage American can’t seem to fix,” and explains how the lack of personal protective equipment has made nursing jobs more dangerous, and another, “Desperately trying to wipe the virus away,” which put a spotlight on the lack of PPE in adult daycare facilities.

One of the most significant obstacles in reporting these stories was that Contrera was unable to spend several days following people in their daily lives and building individual relationships in the way she had in the past to get a better sense of the pandemic from their viewpoint.

“There really is nothing better than observed reporting,” she said. “I had to figure out how to make up for that. I would spend more time on the phone with people than usual and had to talk to a lot more people than I usually would. You have to do more groundwork to make up for what was missed.”

For her story about N95 masks, Contrera’s interviews with nurses involved socially distanced walks while wearing masks. She couldn’t enter the hospital where the nurses worked, so instead, the nurses took pictures, wrote notes, and recorded conversations for her from their day.

“They would call me on their way home from their shift, which was incredibly generous of them because they were exhausted,” she said. “I would say (to them): ‘Talk me through each of your patients today,’ and it was just for 20 to 30 minutes so I could identify moments that I might later write about. … I had to ask them to do more than I normally would because I really wanted to do their work justice. They were gracious enough to be reporting partners with me for the story because they wanted to make sure it was accurate.”

To help her sources re-create the scenes in their lives that she later wrote about, Contrera would offer details from her own life to help them understand what details she needed.

“Even before I ask a question, I can show someone the level of detail I’m hoping they’ll give me when the answer,” she said. “I might say, ‘I will describe my desk to you. I have crumbs in my keyboard, more pens than I will ever use, and a really cold cup of coffee. I have some papers I should probably throw away and a copy of ‘On Beauty,’ one of my favorite books. Then, I can ask them to describe their workspace to me and get a much more full answer than I might have before.”

To read more of Contrera’s advice to AHCJ members, click here. To read more about how she approached her story on the $20 cheeseburger, see Contrera’s interview with the National Press Club institute.