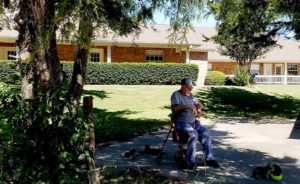 Private equity firms are in the business of making money. On the surface, there is nothing wrong with that. However, a disturbing story in The Washington Post alleges that when private equity is involved in the buying and selling of nursing homes, things are often worse than they seem.

The story, by reporters Rebecca Tan and Rachel Chason, looks at Portopiccolo Group, which has a history of buying one- and two-star rated facilities. During the pandemic’s height, they began snapping up several failing nursing homes in the mid-Atlantic area. Lack of oversight by state or federal regulators resulted in hazardous and downright dangerous conditions at several locations, even placing vulnerable adults in one facility in “immediate jeopardy.”

There’s no doubt that most nursing home operators are trying to do their best in caring for frail and sick older people. However, margins have always been extremely thin, as this recent Harris Meyer story on AARP explains. Since Medicaid covers most of the care, it’s very difficult for operators to break even on costs. For 70 percent of privately run facilities, there’s little profit to be gleaned unless costs are cut elsewhere.

The downhill progression tends to go like this: private-equity firms come in and snap up struggling facilities. They enact cost-cutting measures to increase value, then sell them off after a few years. They take advantage of accounting rules relaxed under the current administration to set up separate holding companies for supplies and services, borrow against assets, pay themselves management fees, and maximize their share of profits to the detriment of residents and workers. It is difficult for regulators even to know who’s in charge, according to Meyer.

And cost-cutting comes at a steep price. Private-equity-owned facilities have had higher infection rates and deaths during the COVID-19 pandemic, as this story in Skilled Nursing News describes. Even before COVID-19 ravaged elderly populations, private equity-owned homes were found to be consistently understaffed, had more inadequate infection control and worse health outcomes.

While the Portopiccolo Group seems to be bullish on taking advantage of financially struggling owners like Genesis HealthCare — they’re not alone. Other private equity groups also are capitalizing on the struggles of nursing home owners.

According to the Post’s story, that’s led to unnecessary sickness and deaths among both residents and workers. “Two Portopiccolo facilities last month were placed in a federal monitoring program for having “a history of serious quality issues”; two others were listed as candidates because of severe deficiencies. Prior to the pandemic, the firm’s facilities in North Carolina were fined more than $480,000 for violating state and federal rules, federal data shows,” Tan and Chasen reported.

The rise of Portopiccolo as a significant player during the pandemic “highlights weaknesses in regulatory oversight of facility owners,” according to this story in Barron’s. In May, The New York Times published a similar report, concluding that the pandemic left for-profit homes in particular “ill-equipped” to handle the pandemic. But as the story noted, this crisis was years in the making due to thin margins among for-profit operators, along with competition from assisted living and home care companies.

As Harris notes in his story for AARP, the only time people seem to pay attention to this issue is when things go wrong. However, this problem will continue to exist since so many older people rely on Medicaid — with its woefully inadequate reimbursement rate — to pay for long-term care. Is the answer more state and federal oversight of nursing homes? Improving reimbursement rates? More stringent investigations of spinoff companies or where profits are going?

Fines and citations take months, or even years, to effect real change. By that time, a facility could change hands again. Will Congress or state legislatures act given the tremendous budget shortfalls due to the pandemic?

Many older adults in long-term care are no longer able to advocate for themselves. It’s going to take a sustained effort by long-term care advocates, policymakers, private insurers and journalists to keep this issue center stage amid the dozens of other pandemic-related crises.

Journalists: How have private equity firms changed the nature of nursing home care in your city? Which companies are buying struggling facilities? Talk to employees, family members, local and state advocates, and ombudsmen to determine whether staffing and quality of care have been affected. Check out Nursing Home Compare to see whether these facilities were already on shaky ground or whether care has declined since being purchased. What, if anything, are state or county regulators doing to enforce standards? This story in the Indianapolis Star shows how state officials can be complicit in exacerbating the problems.