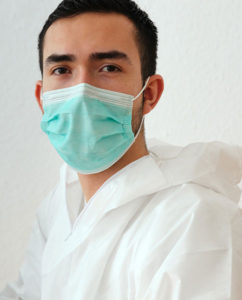 Infectious disease physicians warned Americans to prepare for the worst case scenario this winter –people will be exposed to a surge of multiple dangerous viruses at the same time – SARS-CoV-2 (the cause of COVID-19) and strains of the influenza virus.

“We have to be prepared for the worst-case scenario,” Dr. Leonard Mermel, medical director of the department of epidemiology and infection control at Rhode Island hospital, told reporters at a Sept. 10 briefing hosted by the Infectious Diseases Society of America. “If there was ever a year to get the flu vaccine … and … you could reduce the risk of having these two viruses infect you at the same time or your loved one … this is the year.”

The flu season – which always intensifies during the winter months – is unpredictable. Only about half of Americans usually get the flu shot and in the worst years, the influenza virus can kill as many as 80,000 Americans. In mild years, it kills about 12,000. [See more of why in our AHCJ tip sheet]. Early indications from the southern hemisphere where winter is ending are that the flu season has been mild, which often portends a mild season in the northern hemisphere. Mermel said it is likely the season was mild as result of COVID-19 prevention measures, such as mask wearing, social distancing and good hand hygiene.

But given many Americans’ reluctance to follow COVID-19 prevention measures, infectious disease doctors are uncertain if the U.S. will have as mild a flu season as countries in the southern hemisphere.

“We may not be as vigilant in some areas of the country based on our independence and our American spirit,” he said. “So we have to prepare.”

COVID-19 and the flu, as respiratory illnesses, share similar symptoms – like cough, fever and fatigue – and when people who contract one of these viruses seek care this winter, health providers won’t know which disease someone has. And those sick with the flu could quickly overwhelm health care providers’ resources. In flu seasons of the past, as many as about a half million Americans become so sick from the flu that they need hospitalization.

“We haven’t rounded the corner with COVID-19,” said Dr. Jeanne Marrazzo, director of the division of infectious disease at the University of Alabama at Birmingham during the IDSA briefing. “In Alabama, we remain at about 800-900 range [of hospitalizations] … and there is great concern about college campuses, where students appear to be a huge source of outbreaks … and now we are entering flu season.”

At the moment, there isn’t a widely available diagnostic tool to test for both flu and COVID-19. Three diagnostic tools with that capability were recently approved through emergency use authorization, but it requires a lab that has the technical capacity to conduct genetic testing, Marrazzo said.

She added that it isn’t clear that state laboratories have the supplies to process both COVID and flu tests and that state and local public health authorities have enough staff to adequately support surveillance in this coming flu season.

“It’s a little bit of a house of cards right now,” Marrazzo said. “Despite the energy and effort of public health labs, the capacity is threatened as it has been for years because of public health cuts.”

Marmel is also worried that the flu season leaves Americans even more vulnerable to additional viruses of pandemic potential. In early summer, there were multiple news reports that there is a swine flu, with pandemic potential spreading among pig farmers in China. Though it hasn’t flared into a wider threat, scientists remain concerned.

“This strain has all the attributes that could cause a pandemic,” he said. “Worst case scenario is if this spreads in the fall, when we are worried about COVID.”

For journalists looking for story ideas:

For an AHCJ tip sheet about covering the flu, click here.