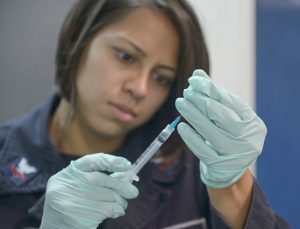 “Curb your enthusiasm” is important advice for journalists covering the development of a COVID-19 vaccine, according to panelists at recent AHCJ webcast.

More than 120 COVID-19 vaccine candidates are being tested worldwide, with about a dozen having reached the human clinical trial stage. It’s perhaps the fastest ever that scientists and drug companies worldwide have mobilized to create a vaccine to fight a virus.

The speed of the research into potential vaccines has created a kind of horse-race narrative in the media, and the public may not understand that the end of the race could end up being multiple years away and even end with no vaccine.

“We are hearing a lot of hype and good news, but I caution you to hold off because vaccines can be really tricky,” Tara Haelle, independent journalist and AHCJ’s medical studies core topic, said during the May 28 webcast about the development of COVID-19 vaccine. “We can think the (vaccines) are doing great, and then we can get to a point where something goes wrong and we have to throw the whole thing out, so remain skeptical and cautious … and curb your enthusiasm.”

Part of the excitement may be driven by coverage of President Trump’s push to make good on his administration’s promise to begin widespread inoculation of Americans by the end of 2020, a program dubbed “Operation Warp Speed.”

To help move that effort along, five pharmaceutical companies, Moderna, AstraZeneca, Johnson & Johnson, Merck and Pfizer, were picked to receive access to billions of federal dollars to develop a vaccine, the New York Times reported on June 3.

Those dollars certainly will matter, but science and human chemistry aren’t always predictable. Scientists caution that what works in a laboratory, or a small set of people, may not be safe and effective in specific populations, such as children, pregnant women, the elderly and those with chronic health conditions.

“It doesn’t hurt to dream, but you can’t give our population false hope,” Maria Elena Bottazzi, Ph.D., associate dean at National School of Tropical Medicine; professor of pediatrics and molecular virology and microbiology at Baylor College of Medicine and Texas Children’s Hospital, said during the webcast.

COVID-19 is caused by the SARS-CoV-2, a sister to the SARS virus. The COVID-19 virus has enough similarities to the SARS virus, that Baylor’s SARS vaccine might be useful in the current battle. Bottazzi’s group is planning to begin a human clinical trial at the end of the summer, or early fall. Baylor also is working on a specific vaccine for the SARS-CoV-2 virus.

Bottazzi said that it is possible that a version of a COVID-19 vaccine (from one of the drug companies supported by Operation Warp Speed) could be ready by the end of the year for use in a targeted population, such as first responders, but she was cautious about whether or not there would be a widely-available vaccine by year’s end.

“The sooner is better, but science is science and evidence will dictate how feasible this will be,” she said.

To help journalists cover this story, Haelle has provided AHCJ members with a comprehensive set of tools, from understanding how vaccines work to a guide to understanding the eight types of vaccines, ways to track COVID-19 vaccine research and how to find the right vaccine experts, as well as more than a dozen questions reporters should ask any researcher to provide better context in their stories.

Click here to watch a replay of the webcast and find links to resources mentioned by Haelle and Bottazzi.