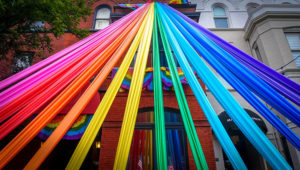 The coronavirus pandemic has put the LGBTQ community at increased risk for severe illness and death if they develop COVID-19. A lifetime of systemic discrimination and poorer health outcomes can make older LGBTQ people especially vulnerable, according to LGBT advocates.

Response to the pandemic has created even greater isolation, increased health disparities and lack of support for this demographic group compared with their heterosexual peers, according to a recent report from SAGE and Human Rights Campaign Foundation. This story in the Dallas Voice notes the current mortality rate among LGBT elders from COVID-19 is 15 percent.

However, there is no tracking of COVID-19 incidents among the LGBTQ population to their knowledge, according to Steve Wilkinson, SAGE’s senior director of programs and services. “It is part of a bigger issue of data collection and the lack of inclusion, as well as an issue of LGBT people not feeling comfortable about coming out to their health care providers,” he said. “What we can tell, anecdotally, is that the pandemic is hitting our LGBT elders hard.”

There’s been a definite uptick in calls to SAGE’s National LGBT Elder hotline, Wilkinson said in an email. Over half of the calls come from New York, Florida, and Massachusetts. “A big fear that we are hearing is that folks fear they are running out of food. Also, folks are concerned that they are not able to go to usual medical checkups for concerning conditions like heart ailments, diabetes, and so on.”

Loneliness is another big concern. “Many folks live alone and don’t have people to check in on them,” he said. The organization has also seen increases in email queries and on social media. SAGE has been organizing check-in phone calls to members of the community and has started some virtual programming for participants in their SAGE centers. Local affiliates are conducting online programming as a way to keep the community connected.

There are 3 million lesbian, gay, bisexual, transgender and queer Americans age 50 and older. Over 1.1 million are 65 and older, according to SAGE. Older LGBTQ people are twice as likely to live alone as their straight and cisgender peers.

Additionally, “LGBTQ Americans are more likely than others to work in industries affected by the crisis — restaurants and food service, hospitals, K-12 education, colleges and universities, and retail. Those make up 40 percent of the industries where LGBTQ people work, as opposed to 22 percent for non-LGBTQ workers,” according to The Advocate.

People with chronic health conditions, including HIV/AIDS, are at elevated risk of complications should they develop COVID-19, according to Sean Cahill, Ph.D., director, health policy research at the Fenway Institute, in a new policy brief.

Compromised immune systems from a higher burden of cancer increase the risk even further. Plus, the LGBTQ+ population uses tobacco at rates that are 50% higher than the general population, and COVID-19 is particularly harmful to smokers.

“LGBT people are also more likely to smoke and vape and to use substances,” Cahill wrote. “All of these conditions and risk behaviors could increase the vulnerability of LGBTQIA+ people if they are exposed to SARS- CoV-2, the coronavirus.“

Determining specific risk for HIV-positive adults is still ambiguous, according to the Healthy Aging Project at GMHC, an HIV/AIDS prevention, care and advocacy organization. What is known is that the overall risk of getting very sick for people with HIV is highest in people with a low CD4 cell count, and those not on antiretroviral therapy. Age and other medical conditions also affect how sick people with HIV become.

In addition to the physical health impacts of COVID-19 on LGBT elders, mental health is a key concern. “This question hits so many different issues in the LGBT community, especially for elders,” said Wilkinson.  A lifetime of discrimination puts LGBT elders at higher risk for stress, which can lead to higher rates of smoking, alcohol use, drug use, depression, loneliness and suicide. He said 59% of LGBT older people report that they lack companionship, and 53% feel isolated.

The situation for rural elders is even more tenuous. In a 2018 study, AARP found access to LGBT resources and LGBT senior resources was significantly reduced in rural areas. This crisis puts all of these issues in sharper focus, said Wilkinson. Many cannot access needed services, even if they have resources. Those with already limited resources, such as internet access, financial aid and community support, are intensely impacted.

Even before COVID-19 hit the U.S., many older Americans — gay and straight — were economically insecure, according to the National Council on Aging. The outlook for LGBT older adults is particularly concerning, said Wilkinson. SAGE’s Out & Visible study found that LGBT older people are far more concerned than non-LGBT older people about their financial security and retirement.

Many experts draw parallels between the COVID-19 pandemic and the LGBT community’s response to that of the AIDS crisis in the 1980s. “In doing our outreach to our LGBT pioneers, sometimes they have flipped the script and become resources to our staff and callers who might not be used to being lonely,” Wilkinson said.

These elders share how they deal with being socially isolated and lonely nearly all of the time. They also share their lessons from their resilience in the face of the HIV/AIDS epidemic. “These folks are truly heroes and are proving that even in the midst of this pandemic, they refuse to be invisible,” he said.

In a fact sheet developed for health care providers, GMHC’s Healthy Aging Project called for changes to health system policies and practices, including:

Journalists may want to contact advocacy and social support organizations in their community to see how the pandemic is affecting LGBT elders. Here are some questions: