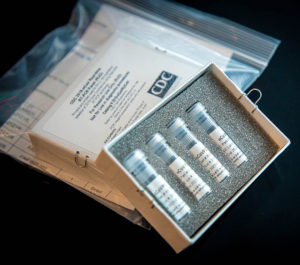 The just-passed multibillion-dollar Families First Coronavirus Response Act includes free diagnostic testing for the new COVID-19 illness — for those fortunate enough to get a test if needed. The law also includes paid sick leave, nutrition assistance and boosts unemployment benefits for Americans out of work due to the pandemic, as Barbara Sprunt reported for NPR.

President Trump signed the bill into law after the U.S. Senate passed it on Wednesday. The House of Representatives had approved it the previous week.

While the cost of testing is covered, many states and counties have limited resources for testing, causing health care providers to take specimens only from the most vulnerable, as Dan Frosch, Ian Lovett and Deanna Paul reported Thursday in an article, “Coronavirus Testing Chaos Across America,” in The Wall Street Journal. Patients seeking these tests would need to meet the criteria for testing and such tests would need to be available, both of which are open questions, they wrote.

Requiring health insurers to cover testing costs removes an important cost barrier and may increase the demand for testing but the law does not cover the cost of treatment. Therefore, a patient who tests positive and is unable to pay for treatment could infect others if that patient does not self-quarantine.

“No-cost testing for patients reduces the financial burden for COVID-19 diagnosis, but does not protect infected individuals who need COVID-19 related care,” said A. Mark Fendrick, M.D., director of the Center for Value-Based Insurance Design at the University of Michigan. “For those who receive their health insurance from their employers, the Kaiser Family Foundation estimated that the average out-of-pocket cost for a COVID-19 associated hospitalization would be $1,300, meaning insurers need to implement programs that protect patients across the entire spectrum of clinical care.”

Before the law was passed, the question of payment for testing was complicated, as Julie Appleby explained in an article for Kaiser Health News on March 6. But now, under the law’s Section 6001, “Coverage of testing for COVID–19,” the legislation says, “A group health plan and a health insurance issuer offering group or individual health insurance coverage” (including health plans grandfathered under the Affordable Care Act) shall cover the cost of testing without any cost sharing (including deductibles, copayments, and coinsurance), prior authorization or other medical-management requirements.

Paul Fronstin, Ph.D., a director at the Employee Benefit Research Institute, explained that because the language in the law says, “group health plan and a health insurance issuer offering group or individual health insurance coverage,” it would cover all insured Americans, including individuals and family members with employer-sponsored health insurance.

Recognizing the need to assist the uninsured, the law also allows states to use Medicaid to cover the cost of FDA-approved testing to diagnose the virus, the cost of administering the test and an associated medical visit, according to a thorough review of the bill, Unpacking the Coverage Provisions in the House Coronavirus Bill, that Katie Keith wrote for the Health Affairs blog.

Keith’s post went up on March 16 before Congress made technical revisions to the bill, but those changes did not affect the coverage provisions, she said via email. “All of that is to say that the blog is accurate for the final bill that passed Congress and was signed by President Trump,” she wrote.

The law defines such tests as “in vitro diagnostic products” that the FDA has approved, cleared or authorized. An in vitro test is one done on blood or other human specimen, such as a clinician would collect via a nasopharyngeal swab for COVID-19. For these tests, payments would be waived for visits to a health care provider’s office (including a telehealth session), an urgent care center or emergency room.

For journalists covering the costs of testing and treatment, a variety of resources are available. The Commonwealth Fund has a page here, the Center on Health Insurance Reforms (CHIR) at Georgetown University has a page here and the Kaiser Family Foundation has a page here.

During a briefing for journalists March 17 (listen here) experts outlined some of the financial assistance options available to Americans. For example, the federal Centers for Medicare and Medicaid Services (CMS) eased requirements to allow states to seek waivers for Medicaid to allow health care providers to provide care to COVID-19 patients from other states. The eased rules were retroactive to March 1, CMS said.

In addition, the IRS issued a rule on March 11 clarifying that a high-deductible health plan linked to a health savings account can pay for coronavirus-related testing and treatment without jeopardizing the plan’s pre-tax status. “This clarification means that an individual with an HDHP that covers such costs can continue to make pre-tax contributions to the HSA,” said Kevin Lucia, M.H.P., J.D., a research professor at CHIR.

For Americans who lose their jobs, the ACA provides premium tax credits to U.S. citizens and lawfully present immigrants who purchase coverage in the marketplace and who have income between 100% and 400% of the federal poverty level, Lucia added. “In addition, marketplace enrollees with household incomes below 250% of the federal poverty level should have access to plans with reduced out-of-pocket costs, such as lower deductibles, co-pays and coinsurance,” he said.

Those with health insurance through the ACA marketplace and who get premium tax credits can qualify for a 90-day grace period if they fall behind on premium payments, said JoAnn Volk, M.A., a CHIR research professor. “As long as they pay their first monthly premium to make coverage effective and pay outstanding premiums before the 90 days ends, they can retain coverage,” she added. This issue is covered in CHIR’s Navigator Resource Guide, which journalists may find useful when covering questions about the ACA, she said.

Note, however, that while the plan holder isn’t paying those premiums, the insurer won’t cover any medical claims, said Karen Pollitz, a senior fellow at the Kaiser Family Foundation.

Anyone in a state that has expanded Medicaid and who has income under 138% of the federal poverty level would be eligible for Medicaid, explained Volk. And, because there are no special enrollment periods, these people can enroll at any time, she said. This provision would apply to an individual who loses a job and thus would make less than about $17,000 (or $35,000 for a family of four). “If that’s the case, you can just get covered,” she added.

Sara Rosenbaum, the Harold and Jane Hirsh Professor of Health Law and Policy at George Washington University, added that in states that expanded Medicaid, enrollment in Medicaid is available at many hospitals, community health centers and other health care facilities. In addition, Americans who have short-term, limited-duration plans, which often do not cover all costs of care, can enroll in Medicaid and thus have coverage from both plans, she said.

On Friday morning, policy expert Joan Alker reported on Twitter that under the law, states get a 6.2 increase in federal matching funds and cannot terminate enrollees for any reason during the emergency, which Trump declared on March 13. Also, states cannot raise premiums or impose new barriers to coverage, such as work requirements. Alker is the executive director of the Center for Children and Families at Georgetown and a research professor at the McCourt School of Public Policy. On Sunday, the center published a report on the effect of the Families First Coronavirus Response Act on Medicaid and the Children’s Health Insurance Plan, the Families First Coronavirus Response Act Medicaid and CHIP Provisions Explained. The center also has a Coronavirus (COVID-19) Resource Center.

States get 6.2%⬆️ in their match rate, but during the period of the emergency they cannot terminate ANYONE on Medicaid for any reason.

They can not raise premiums or impose new barriers to coverage like work requirements. pic.twitter.com/oHHo8mBCyp

On Friday, NPR reported that at least nine states have reopened their health insurance exchanges “to help ease consumers’ concerns about the cost of health care so that the sick will not be deterred from seeking medical attention. ” Those states are Colorado, Connecticut, Maryland, Massachusetts, Nevada, New York, Rhode Island, and Washington. California announced on Friday that its exchange “will continue to allow residents to enroll through June because of the upheaval caused by the coronavirus. The District of Columbia is also allowing residents to sign up for coverage for reasons unrelated to the outbreak.”