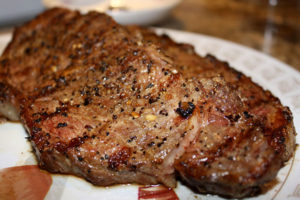 “Too much red meat can cause cancer.” It’s a depressing statement for the bacon and beef lovers out there, but it’s a part of nearly every major medical organization’s evidence-based guidelines for several years.

In fact, as I was covering the North American Menopause Society’s annual meeting last weekend, the session on lifestyle risk factors for breast cancer specifically included limiting consumption of red meat and processed meats as one of the 10 recommendations for reducing cancer risk from the American Institute for Cancer Research (AICR) and the World Cancer Research Fund.

So it’s no surprise that nutrition experts are up in arms this week with the publication of “recommendations” in the Annals of Internal Medicine — the highly respected, reputable journal of the American College of Physicians — stating that 3-4 servings of red and processed meat each week is just fine. (My reason for scare quotes around “recommendations” will become clear shortly.)

The press release states that the new advice is based on “5 high-quality systematic reviews of the relationship between meat consumption and health” — but more importantly, as the Annals press release also states, are “contrary to almost all other guidelines that exist.”

And that’s a problem.

This is exactly the kind of news that frustrates and confuses readers: red wine is good for you. No, alcohol causes cancer. Coffee increases cancer risk. Coffee reduces cancer risk. Red meat causes cancer. Eat all the red meat you want! This kind of problem, a frequent one (if not so dramatic) in coverage of medical studies, requires reporters to include plenty of context in their coverage if they want to be responsible and genuinely help readers make sense of the findings.

NPR’s coverage of this red meat business is a fantastic example of digging deep into context and helping readers understand why a disconnect is occurring, doing far more journalistic public good than simply faithfully reporting the findings and including a few experts’ quotes would do. Importantly, the story notes high up just how widely held the consensus is to limit red and processed meats: “Recommendations from the American Heart Association and the American Cancer Society, as well as the U.S. Dietary Guidelines, all call for limiting red meats and processed meats.” (So do a dozen other medical organizations.)

The NPR piece captures how extreme this study is for diverging so dramatically from existing guidelines by quoting two of the nation’s best nutrition scientists right at the start: “I am outraged and bewildered,” Christopher Gardner, a Stanford medicine professor, told reporter Allison Aubrey. Then Aubrey proceeds to explain the different systems for evaluating evidence used by the new group versus the many nutrition scientists whose work contributed to everyone else’s guidelines.

This kind of story may seem a bit in the weeds for those of us used to run-of-the-mill single-study stories, but Aubrey makes the story accessible and provides just enough detail to help readers understand that no, science isn’t broken, but yes, nutrition science is complicated. And though her story doesn’t outright say so, her reporting (rightfully, in my opinion) implies that, perhaps, we ought to listen to the consensus of nutrition scientists rather than a “self-appointed group” whose members may not necessarily have the same qualifications in nutrition and dietary research, as Aubrey’s sources and this illuminating Medium piece point out.

I didn’t cover this study, but if I had, I’d likely have approached it as a comprehensive deep dive, rather than a quick daily, as I did when I covered the study about fluoride a few weeks back. Aubrey’s piece is a great example of how that can be done even within the constraints of a shorter-length consumer publication.

When reporters cover studies like this, they need — in my own opinion, which is not held by all health journalists — to be cognizant of the worry that Yale professor David L. Katz expresses in the Medium piece: “I have a much, much bigger concern: This will further undermine trust in nutrition science. Nutrition science has been assaulted in inappropriate ways as is; a number of people have made careers out of refuting fundamental truths in nutrition and implying there is contention and doubt where there really is none. These publications will effectively say at an extremely high volume to the public: Even the most settled, cardinal elements of nutritional understanding are up for debate. And therefore you can trust nothing. And therefore you can trust no one. And therefore there are no experts. And therefore anything goes — eat whatever the heck you want.”

It’s not journalist’s job to “defend science” per se, but it is our job to make sure readers understand how science works, how to think about scientific findings and what “science” actually is: a process, not a single, static, monolithic body of knowledge or group mind. Too often the public thinks of it as an “institution” that can’t be trusted when “it” flip flops every few weeks on its conclusions, and journalists have long unwittingly contributed to that perception. At the least, we have a responsibility not to erode the public’s faith in the scientific process since it’s the best method we humans have for trying to learn truths about our lives and our universe. Including context like that in Aubrey’s piece is therefore utterly essential to responsibly informing readers about medical research.

With studies that people use to evaluate their lifestyle and health habits, the two biggest voices that can influence readers’ attitude toward science and research are journalists and doctors. Readers rely on journalists to help them make sense of confusing scientific findings and recommendations, and we can only fulfill that responsibility if we take the time to consider the big picture, ask hard questions and help readers understand the “how and why” as much as the “what.”