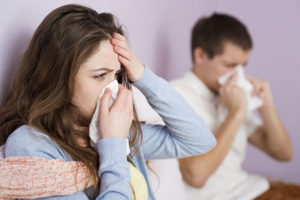 If you are covering infectious diseases and looking for ways to prioritize your story planning, consider scrolling through the list of podcasts hosted by the National Association of County and City Health Officials (NACCHO).

NACCHO represents public health officials throughout the country and its bi-monthly podcasts, hosted by Ian Goldstein, the organization’s government affairs specialist, touch on some of the most pressing infectious disease problems that keep top public health officials up at night. The concerns range from stemming the increase in sexually transmitted diseases to the growing problem of antibiotic resistance to a rise in Hepatitis A outbreaks.

In August, Stephen Redd, M.D., the Centers for Disease Control and Prevention’s deputy director for public health service and implementation science said the disease that worries him the most is a pandemic caused by influenza or another type of respiratory virus.

“An influenza pandemic has to be at the top of the list,” he said on Aug. 29. “We know that the influenza virus has the capability of mutating from a disease that only affects animals to humans and we have experienced that four times in the past century, so we know we are facing a future influenza pandemic.”

Respiratory illnesses, such as the flu, is a priority of concern because “the tools to prevent transmission are limited,” Redd said.  Flu is spread via the water droplets in people’s breath, enabling the virus to quickly move from person-to-person.

Influenza has mutated to cause a virulent pandemic four times – in 1918, 1957, 1968 and 2009 – in the past 100 years. A pandemic is an epidemic extending over a large geographic area involving a disease with a potentially high mortality rate because people lack immunity, and is spreading quickly from person-to-person.

Redd added that he is also worried about diseases spread by mosquitos, like Zika and West Nile.  Last year, the CDC reported that illnesses from mosquito, tick and fleas bites had tripled between 2004 and 2016.

If there were to be a large public health emergency, such as a pandemic or a natural disaster, Redd says the U.S. is much better prepared to respond since the 9/11 terrorist attacks in 2001 and Hurricane Katrina in 2014.

To get up to speed on what is on the minds of local public health officials, check out NACCHO’s podcasts here.