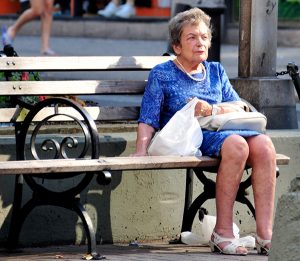 Older adults are New York City’s fastest growing population. There has been a 20 percent jump in the 65-and-over population since 2005 and the majority (60 percent) of New York’s 1.3 million older adults are women. And many of those women are struggling.

The New York City Council addressed this ongoing but, often unseen, crisis facing women as they age in a Jan. 23 hearing. Testimony by activists, experts and representatives from the NYC Department for the Aging and the Commission on Gender Equity, painted a vivid and disturbing picture of the many economic challenges facing older women in New York City. [A video of the hearing is here].

Access to affordable and safe housing is a priority issue for older women living on fixed incomes. Currently, the demand for subsidized senior housing far outpaces supply. Women comprise the majority of severely rent-burdened households not receiving any form of housing assistance in New York City and, as a result, more women are experiencing homelessness for the first time as older adults.

The City will need to ramp up investment in affordable senior housing and increase funding for the Department for the Aging’s Senior Centers, caseworkers, and mental health services, said Margaret Chin, who chairs the City Council’s Committee on Aging. “The bottom line is that we will need a comprehensive strategy to address what is a comprehensive problem.”

She called for a comprehensive assessment of the needs of New York City’s growing population of older women. “Economic problems can impact all women, but the challenges are greater for women in vulnerable groups, such as women of color, lesbian, gay, bisexual, transgender, and queer women, and immigrant women.”

As women age, decades of pay inequity, uncompensated — and often unrecognized — work as caregivers, comparatively higher health care and transportation costs, as well as myriad other factors contribute to their increased risk of poverty. The numbers are stark: 17 percent of women over age 65 in NYC are poor, compared to only 12 percent of men over 65. Women also face higher rates of poverty as they age, according to the Center for American Progress. By the time women reach their 80s, almost one-in-four are living in poverty. The rates are even higher for women of color.

Women tend to rely on Social Security income far more than their male counterparts, compounding their financial vulnerability. Yet women typically draw less from SSI and other retirement plans due to a lifetime of salary inequity, as well as significant periods of time outside the workforce in order to care for children and/or elderly family members, as this CNN story explains.

“Ageism continues to be a major systemic cause of poverty in older adults,” said the Radical Age Movement’s executive director, Alice Fisher. “Older women face the additional challenge of sexism. The time has come to call for age justice.”

We have known for years that a gender pay gap exists, so it should not be a surprise that aging women have a greater chance of living in poverty in New York City, said Council Member Debi Rose, a member of the Committee on Aging. Pay inequities snowball over time, affecting retirement and pension levels, and creating economic, social and health disparities. Research shows that poorer people “age” earlier, including earlier onset of disease, loss of function and impairment.

The status quo fails vast numbers of women throughout their lives, and this failure contributes to the tragedy of a large and growing number of older women aging into poverty, said Helen Rosenthal, Chair of the Council’s Committee on Women. “The city can do better.”

Journalists: How is your city addressing the issues of aging and poverty among seniors, especially among older women? In Massachusetts, this CommonWealth story concluded, the state seems to have dropped the ball.

For a deeper dive, this Justice in Aging Brief looks into the reasons women are more likely to age into poverty, and this issue brief from the Kaiser Family Foundation looks at how many seniors live in poverty.