Over the past six months, journalists for the Columbus Dispatch have written more than 40 articles about the murky world of pharmacy benefit managers (PBMs) in Ohio. This week, they wrote one of the most important stories in this ongoing series, “Ohio firing pharmacy middlemen that cost taxpayers millions.”

In this article, they explained that the Ohio Department of Medicaid was changing the way it pays for prescription drugs by, “giving the boot to all pharmacy middlemen” because the Medicaid program wants to shift away from what’s called the “spread pricing” practice. 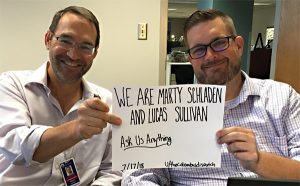 Marty Schladen and Lucas Sullivan , pictured for a recent Reddit “Ask Me Anything.”

In the article, published on Aug. 14, they wrote that a state-commissioned report showed that in one year, the two PBMs billed taxpayers $223.7 million more for prescription drugs than they reimbursed pharmacies to fill those prescriptions.

“PBMs hired by Ohio Medicaid’s five managed care plans have been making millions by billing taxpayers far more than they reimburse pharmacists for filling prescriptions for Medicaid patients, with the difference known as price spread,” Sullivan and Candisky explained. “Under a ‘pass-through’ model, pharmacy middlemen would be paid a straight administrative fee and forced to bill the state the same amount they pay pharmacists.”

The five managed care plans contract with two PBMs: CVS Caremark has contracts with four health plans, and OptumRx has a contract with the other plan. In a statement, CVS Health said the news reports were inaccurate, that the PBMs serving Ohio’s Medicaid program will continue to help Ohio Medicaid members manage their drug costs. OptumRx did not respond to a request for comment from AHCJ.

In the series, called “Side Effects, an ongoing investigation into the rising costs of prescription drugs,” Candisky, Schladen and Sullivan have thoroughly covered how PBMs work, writing on such topics as, “How so-called rebates drive up the cost of prescription drugs,” “Was CVS favored by state in multimillion-dollar deal to provide HIV drugs?” and “Local pharmacies and their personal care in danger of disappearing.”

This year, many health care journalists have written about PBMs extensively. In June, Katie Wedell, an award-winning data journalist, wrote about she has covered PBMs in Ohio, and earlier this week we wrote about the work Tarbell has done on pharmacy contracts.