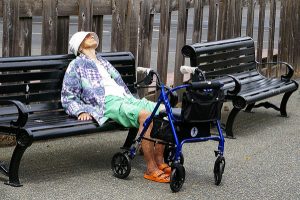 Sleep. It’s that wonderful time when your body is relaxed, you’re soon off to dreamland and hours later wake up refreshed, ready to tackle the coming day.

If only it were so easy.

For many older adults, achieving quality sleep is hard. More than half of those over age 65 report difficulty sleeping. Ongoing sleep problems may contribute to or exacerbate health problems such as obesity, hypertension, diabetes or heart disease. Contrary to popular myth, older adults need as much sleep as do younger people – about seven to nine hours a night. But as people age they tend to have a harder time falling and staying asleep than when they were younger, according to the National Sleep Foundation.

Sleep problems can lead to a whole host of unintended consequences, such as irritability, over-reliance on caffeine, distractedness, memory problems and an increased risk of falls and driving accidents. Among older adults, the cognitive and medical consequences of untreated sleep disorders decrease quality of life and contribute to functional limitations, which can lead to loss of independence increased risk of death from any cause, according to Healthy People 2020.

Many older adults also report being less satisfied with sleep and more tired during the day. They often sleep less deeply and wake up more often throughout the night, which may be why they may nap more often during the daytime. Nighttime sleep schedules may change with age too. Many tend to get sleepier earlier in the evening and awaken earlier in the morning, according to the American Academy of Sleep Medicine (AASM).

As this new AHCJ tip sheet explains, insomnia is the most common sleep problem in adults age 60 and older, often lasting for days, months or even years. It can also lead to its own seemingly endless loop as an individual becomes so anxious about not falling asleep that they can’t fall asleep. Side effects of some medications can contribute to poor or broken sleep, as do conditions such as sleep apnea and movement disorders, the AASM says.

Incontinence can cause multiple awakenings for trips to the bathroom. Chronic pain is another common issue that can wake up older adults at night and keep them awake. Those with Alzheimer’s disease may develop different sleep habits, and wander during the night; this creates problems both for the older adult and caregivers.

Some seniors turn to over-the-counter or prescription medications to help them fall or stay asleep. That can lead to other serious issues, including increased fall risk, medication dependency and higher risk of cognitive impairment according to one study from the University of Colorado, Boulder.

There are many non-pharmacological ways to get a better night’s sleep. Many find success with relaxation techniques, limiting caffeine, exercise, avoiding naps, and developing an optimal bedtime routine, as this Forbes article explains.

Sleep problems in older adults that continue for more than a few weeks should prompt a trip to the doctor or a sleep specialist who can help determine probable cause. It may take a little trial and error, but most sleep issues among seniors have a solution.