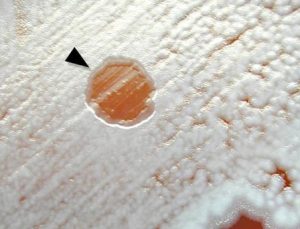 A desire to put a human face to antibiotic resistance led reporter Chris Dall to dig into the relatively unknown world of viral research aimed at killing superbugs.

Dall began investigating bacteriophages, which are viruses that kill bacteria, when he was assigned a story to write about a study that appeared in the scientific journal, Antimicrobial Agents and Chemotherapy in August 2017. The report dryly described a method of using viruses to save a 68-year-old man, who was dying from an antibiotic-resistant infection.

Dall wrote up something short about the study for his publisher, the Center for Infectious Disease Research and Policy’s Antimicrobial Stewardship Project, but he knew that there was likely to be a compelling narrative hidden within the scholarly article. After getting permission to write a longer piece, Dall began calling researchers listed in the article, who helped him find the patient described in the study. Luckily, the patient, Tom Patterson, and his wife were scientists and skilled communicators, and helped Dall get the details he needed to write a vivid detective story about bacteriophage research. In a new “How I Did It” piece for AHCJ, Dall describes how he wrote the story.

Research on using viruses to kill bacteria has been around since the beginning of the 20th century, but didn’t garner much interest among scientists because antibiotics were so successful in treating bacterial infections. Now that there are fewer antibiotics in the pipeline and antibiotic resistance is a growing global threat, more scientists are taking a look at alternatives to antibiotics. The National Institutes of Health in 2016 awarded $5 million for 24 research projects on phage therapy.

Dall’s story highlighted some of institutions doing the phage research, which includes Texas A&M’s Center for Phage Technology. Others include the Naval Medical Research Center in Silver Spring, Md. and a company called AmpliPhi Biosciences, based in San Diego. The laboratory side of phage therapy involves searching through catalogues of viruses collected by scientists, and then testing them to see which one will kill the specific bacteria coursing through the body. Once the virus has been found, it has to be purified to eliminate toxins. Then the right dosage has to be found for the patient. The process is extremely time consuming and, until Patterson, the therapy hadn’t been approved by the Food and Drug Administration to be used on a human. The FDA has approved several phage therapies for use in food safety. Patterson’s doctors were able to get an emergency investigational new drug approval from the FDA to try the phage therapy, which Patterson and his doctors believe cured him from his infection.

“My hope is to find more stories like this, because I think that putting a human face on antibiotic resistance is important for getting the wider public to understand the severity of the issue,” said Dall.

The story won third place for best reporting in the trade publication and newsletter category in AHCJ’s Awards for Excellence in Health Care Journalism for 2017.

For further reading on phage therapy research, check out: