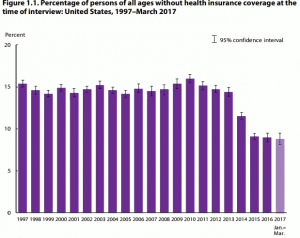 Source: Early Release of Selected Estimates Based on Data from the January–March 2017 National Health Interview Survey, September 2017. National Center for Health Statistics, National Health Interview Survey Early Release Program.For January through March of this year, the rate of Americans who were without health insurance was 8.8 percent, according to the National Center for Health Statistics.

Whatever actions Congress and the Trump administration ultimately take to repeal and replace the Affordable Care Act, or in the short term attempt to weaken it, we already know their efforts will affect how many Americans have health insurance. The question now is how much of an effect their efforts will have.

We have sources that can provide a baseline for discussion, such as the National Center for Health Statistics’ (NCHS) National Health Interview Survey (NHIS) and the Gallup Sharecare Well-Being Index. Both resources base their data on surveys and are regularly updated.

The most recent NHIS report is from last month and shows that 8.8 percent of Americans were uninsured at the time of the survey, which was the first quarter of this year. The 8.8 percent rate is a record low (according to NHIS data going back almost 50 years) and is lower than the 9.0 percent rate NHIS reported for 2016, but the difference is not statistically significant, the center said.

Many factors make the NHIS data useful for journalists, such as the fact that the most recent report shows changes in the uninsured rate going back 20 years. In 1997, the rate was 15.4 percent and 41 million Americans lacked health insurance. Since then, the rate was highest in 2010 at 16.0 percent when 48.6 million Americans lacked health insurance.

For comparison, consider that in the first quarter of this year, when the uninsured rate was 8.8 percent, 28.1 million Americans did not have insurance coverage.

The center publishes these reports quarterly. The next one will be released in November and will cover the first half of 2017.

The NCHS interviews a sample of Americans. The center defines people as uninsured if they did not have any private health insurance, Medicare, Medicaid, Children’s Health Insurance Program, state-sponsored or other government-sponsored health plan, or military plan, or if they had only Indian Health Service coverage or a private plan pays for just one type of service, such as accidents or dental care.

Another factor that makes the NCHS data useful is the ability to search for reports on health insurance coverage data going back to 1968. See, for example, this report, Long-Term Trends in Health Insurance Coverage, which includes data on health insurance coverage since then, and shows the 8.8 percent is a record low rate for the uninsured population in that time. To view this report, go the NCHS press room, choose 2017 schedule and then select “Health Insurance Coverage” as a keyword search term. Earlier this year, we wrote about the work of NCHS here, and how the rate of uninsured Americans dropped in every state as a result of the Affordable Care Act.

Another report that shows the uninsured rate at a record low is from Gallup. The most recent Gallup report, dated July 10, says the percentage of adults in the United States who did not have health insurance rose in the second quarter of 2017 to 11.7 percent, an increase of 0.4 percentage points from the 11.3 percent rate in the first quarter. “The uninsured rate, measured by Gallup and Sharecare since 2008, had reached a record low of 10.9 percent in the third and fourth quarters of 2016,” Gallup said.

The U.S. Census Bureau also tracks health insurance rates and reported earlier this month that the uninsured rate was 8.8 percent last year. This report includes health insurance coverage data it collected since 2014 for its Current Population Survey Annual Social and Economic Supplements and the American Community Survey. That report is Health Insurance Coverage in the United States: 2016.

One other source of data on health insurance rates comes from the Medicaid program, which tracks enrollment in the Children’s Health Insurance Program. Last year, 8.9 million children enrolled in this program, Medicaid reported. Last week, my colleague Mary Otto highlighted in an AHCJ blog post the precarious nature of this program. The Commonwealth Fund also has a report on this program. You can view annual CHIP enrollment reports here.