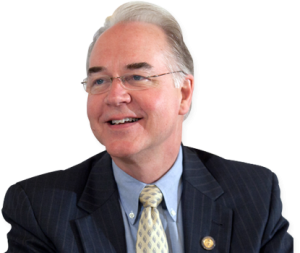 President-elect Donald Trump has selected Dr. Tom Price, an orthopedic surgeon from Georgia who has served in the House for six terms, to serve as his secretary of Health and Human Services.

That’s a signal that the Trump administration is going to pursue a very conservative health policy agenda – and not just on repealing the Affordable Care Act.

Price is the author of one of several ACA replacement proposals put forth in the House – and it’s one of the most conservative. He relies heavily on market forces, and the tax code to reshape the post-ACA insurance market. People would get subsidies in the form of tax credits – based on age, not their economic status, and generally not enough to pay for the kind of comprehensive plans on the market today.

But he says people should have the option of buying narrower plans – and that competition and deregulation will bring down prices. He also expands Health Savings Accounts, limits the tax breaks for companies that cover their workers (and dependents) and creates high-risk pools (but only puts in about $3 billion over three years, which even other conservative analysts see as low).

Here’s a description of his plan, as of 2015. Here’s an NPR piece by Alison Kodjak on the highlights that ran right after Trump announced the selection.

Here’s an essay Price and two other conservative physicians serving in the House wrote this fall for JAMA Forum.

And here’s an op-ed from Price himself on the conservative Townhall site backing the plan Speaker Paul Ryan put forth for House Republicans. (Price’s own preferred approach is similar but somewhat to the right.)

As the GOP fights over whether and how much of the Affordable Care Act to preserve – and how strenuously to preserve it – while the country transitions to a “replacement,” the HHS secretary will have a key role. Price would have a say in deciding which rules get rolled back, which get vigorously enforced, and will shape how the exchanges function in the interim. It’s not clear, for instance, how the incoming administration will address the cost-sharing subsidies that the House GOP sued the Obama administration over. If they stop them, insurers are more likely to flee the exchanges and speed up the demise of the ACA. Even if Price’s HHS doesn’t do anything very drastic for a year or so, it’s hard to imagine him flying around the country a la Sylvia Burwell encouraging people to sign up next year.

But his agenda doesn’t stop with the ACA. He also wants to overhaul Medicaid and Medicare, putting a far more conservative stamp on them. He’d block grant Medicaid – and turn Medicare into a voucher-like premium support program. For procedural and political reasons – both will be harder for the incoming Congress than repealing the ACA.