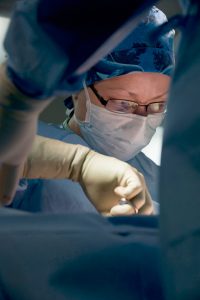 Wahlberg focused on three aspects of organ transplantation: allocation, deceased donation and living donation. He not only discovered that geography plays a major role in who gets organs, but also that various strategies for increasing rates of donation are rife with inconsistent definitions of “death” and ethical dilemmas. He also learned that researchers don’t have much evidence about long-term outcomes for living donors, largely because they’re rarely followed beyond two years and there’s no national registry to aid long-term tracking.

“This was a timely and comprehensive look at the state of organ donation that shed new light on a system that effectively determines who lives and who dies,” wrote the judges of the AHCJ Awards for Excellence. “The series of compellingly written articles took a provocative look at possible solutions, and put a human face on the ethical debate over the risks of being a living organ donor, and even when a person can be considered dead.”

Preparing an extensive series of articles on one topic is more difficult in today’s difficult media economic environment. It’s a luxury many reporters wish they could do, but lack the resources. In Wahlberg’s case, an AHCJ reporting fellowship helped make the series possible. (The deadline to apply for the next round of funding is coming up soon, by the way.)

“This was a great opportunity to get support and resources to do a project I likely could not have done otherwise,” he said. The opportunity to study transplant policy in depth during that fellowship opened the door to the outstanding series he eventually produced.

In a new How I Did It article, Wahlberg goes into detail about how he researched the story and what he learned from relevant medical studies. His piece also is chock full of links that may help other reporters wanting to explore organ donation in their areas to localize a major issue that will only become more important as medical technology advances.