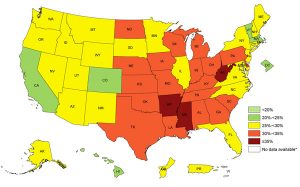 Obesity in older adults is a very real and growing challenge. Since 1991, there’s been a steady increase in obesity rates among both men and women in the 55 and older age bracket.

In just one year (from 2013 to 2014), a Gallup poll found that the greatest increase in obesity was among the 65-plus age group (from 26.3 to 27.9 percent). A small annual increase can result in a lot of extra pounds over the years. This likely will put the health system under additional strain as baby boomers age into Medicare and as people live longer with weight-related chronic disease.

Obesity (defined as body mass index of 30 or higher) can lead to serious health conditions such as heart disease and diabetes. It also exacerbates diseases that an older adult may already be battling. More than a third (35.4 percent) of those over age 60 are considered obese, according to the CDC report Health, United States 2015. A Columbia University Mailman School of Public Health analysis puts this figure even higher, at 38 percent of those age 60 and older.

This chart from the Population Reference Bureau breaks out the obesity increase among seniors by age from 1998-2012.

It can become a vicious cycle. Obese adults tend to exercise less, have more disability and experience difficulties with activities of daily living. They can experience more symptoms of chronic illness, such as shortness of breath, fatigue and swelling of feet and ankles. This makes it harder for them to engage in activities that might help drop the weight and affects quality of life. Obese older adults can find it harder to perform simple activities, such as shopping, socializing and going to the movies, according to Gallup.

The Center on an Aging Society at Georgetown University in Washington D.C., reported that the problem is only getting worse. In the past 25 years, obesity rates have risen among all older adult groups, particularly lower income, less educated, and non-white seniors. (The analysis includes anyone over age 51).

The financial burden for taxpayers is high too. Medical spending for obesity related diseases is about $27 million annually, with Medicare and Medicaid paying at least half the costs.

Joel Berg, executive director of the New York Coalition Against Hunger, wrote in Aging Today about the incongruity between food insecurity and obesity among older adults. They are:

“…flip sides of the same malnutrition coin because healthier food is more expensive, harder to find and more time-consuming to prepare than less healthy food, and disparities are exacerbated by government policies that tend to subsidize junk food rather than produce. While some of the hungriest and poorest Americans eat so little they lose weight, others with a marginally better ability to get food (either through limited food purchases, meager SNAP allotments or food bank pantry donations) eat food of such poor nutritional quality that they gain weight.”

Even Congress has noticed. The Treat and Reduce Obesity Act  (TROA) would authorize Medicare to cover intensive behavioral therapy for obese older adults by non-primary providers (including nurse-practitioners, endocrinologists, nutritionists and registered dietitians). It also would cover Part D prescriptions to treat the condition. Bipartisan supporters — now numbering 150 in both houses — are optimistic that the legislation will pass this year.

Researchers are looking for solutions too. Gary Rotstein recently covered a study from the University of Pittsburgh Prevention Research Center, called MOVE UP, which helps older adults safely lose weight safely and make lifestyle modifications to keep it off. Researchers hope that educating vulnerable populations and helping them make the right changes in diet and exercise will prevent, or at least slow, the future impact of excess weight on the aging population.

Here are some questions to ask when covering this issue: