In Milwaukee on Thursday, President Obama reported that, under the Affordable Care Act, 20 million Americans who were previously uninsured gained health insurance coverage.

This number is a new high for the ACA, and is well above the previous estimate of 17.6 million previously uninsured Americans who gained coverage under the ACA as of September 2015. Last summer and fall, we covered how the federal government was reporting historically low rates of uninsured Americans.

For journalists, there are many stories to pursue in this latest data, such as comparing state uninsured rates to the national average and exploring what it might take to get the last 11.5 percent of uninsured Americans enrolled in health insurance plans.

Earlier this week, Evan Sweeney of FierceHealthPayer wrote about a new report on the uninsured in Massachusetts. Even with subsidies, some 200,000 Massachusetts residents seeking health insurance still couldn’t afford the coverage, and the application process itself was challenging, he reported. “Although the study was limited to Massachusetts, it offered an inside look into the tendencies of uninsured individuals that could have broad implications,” Sweeney wrote. The report by the UMass Medical School was commissioned by the Blue Cross Blue Shield of Massachusetts Foundation.

In a report published today, researchers at the Kaiser Family Foundation showed there is still opportunity to reduce the uninsured rate. If all states improved to at least the average of the 10 best-performing states, the researchers estimated that enrollment through the state and federal marketplaces could reach 16.3 million from the current 12.7 million.

“Assuming that around 10 percent of these people would not pay their first month’s premium, this would translate into an “effectuated” enrollment total of 14.7 million,” they wrote. “This may provide a reasonable estimate of a ceiling on what marketplace enrollment could grow to over the next several years, assuming current levels of premium subsidies and outreach.”

The 20 million figure that Obama referenced came from the latest report (PDF) from the federal Department of Health and Human Services, Office of the Assistant Secretary for Planning and Evaluation. The ASPE estimates that among those 20 million uninsured adults who gained health insurance under the ACA, 17.7 million were adults aged 18 to 64 and 2.3 million were young adults aged 19 through 25 who gained coverage under the ACA rule allowing them to remain on a parent’s health plan through age 26.

ASPE based this estimate on data from the National Health Interview Survey and the Gallup-Healthways Well-Being Index. Using the NHIS and Gallup-Healthways data, ASPE estimated that the rate of uninsured Americans under age 65 was 11.5 percent as of Feb. 22, down almost 9 percentage points from 20.3 percent in October 2013. 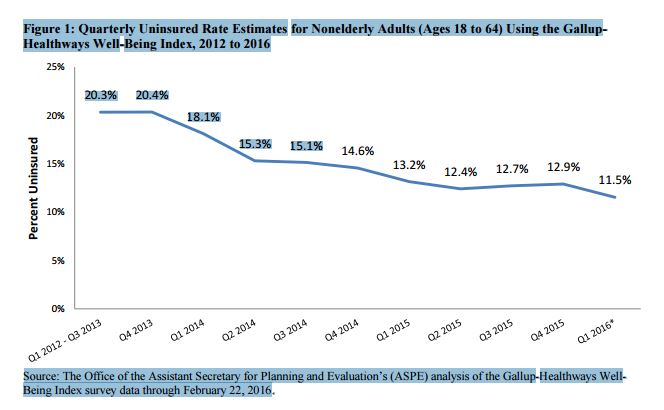 An analysis of data from the Gallup-Healthways Well-Being Index survey by the federal Department of Health and Human Services, Office of the Assistant Secretary for Planning and Evaluation, shows the Affordable Care Act cut the uninsured rate almost in half among Americans under age 65. The rate dropped from 20.3 percent in the third quarter of 2013 to 11.5 percent in the first quarter of this year.