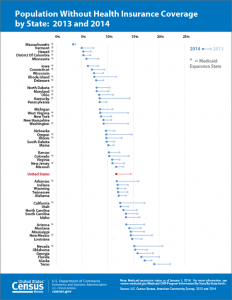 For the past two months, new data on the rate of the uninsured in the United States have reached what appear to be historic levels.

Last week, the U.S. Census Bureau released the latest numbers, reporting that the percentage of Americans who were uninsured last year dropped by 2.9 percentage points from 2013, the largest percentage-point decline since 2008.

Last month, a different federal analysis showed the uninsured rate among all Americans in the first quarter of this year dropped to 9.2 percent, the lowest rate since 1972, Reena Flores reported for CBS News. That number comes from the latest report from the National Health Interview Survey from the federal Centers for Disease Control and Prevention’s National Center for Health Statistics. We covered the CDC report here.

In coverage for Vox and Forbes, Dan Diamond pointed out that the CDC’s research was the first major survey ever to show more than 90 percent of Americans with health insurance.

Among these two significant reports, the Census Bureau numbers are particularly important, as my colleague Susan Heavey explained last week, and because they give us a baseline to evaluate trends in the future. The bureau’s report shows, for example, that employer-based insurance covered the most people (55.4 percent of the U.S. population), Medicaid covered 19.5 percent, Medicare covered 16 percent and individuals who purchased insurance directly represent 14.6 percent. It also shows that the uninsured rate dropped in every state and the District of Columbia.