This is estimated to be the lowest rate of all uninsured Americans, of all ages, since 1972, when the center began reporting on that data from the National Health Interview Survey, Reena Flores reported for CBS News.

Researchers at NCHS explained Thursday that they have not calculated the uninsured rate for all ages every year in part because the survey methodology has changed. But because the uninsured rate for those under age 65 was 10.7 percent from January to March of 2015 and 10.7 percent is the lowest since 1972, then it is safe to assume that the 9.2 percent rate for all ages also is the lowest rate since 1972, they said.

That 9.2 percent represents 29 million Americans who were uninsured from January to March of this year and is 7 million fewer than those uninsured last year, the center said. For the survey, NCHS interviewed 26,121 noninstitutionalized Americans. 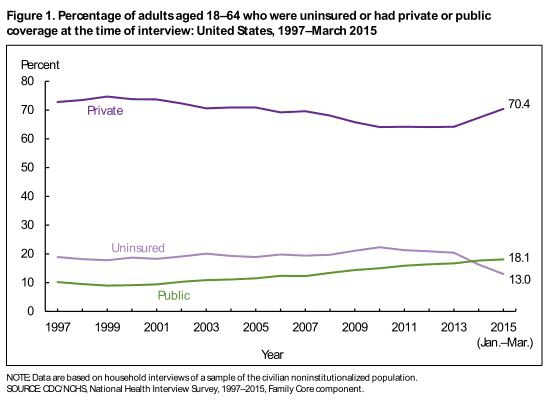 The report did not say why the uninsured rate declined or why the rate of those with private and public insurance rose. But as Jonathan Cohn wrote for the Huffington Post, “… the timing and characteristics of the trend make the primary reason obvious: It’s President Barack Obama’s signature health care law.”

The percentage of children under age 18 who have private health insurance also rose. The rate increased from 52.6 percent in 2013 to 56.3 in the first quarter of 2015, the center said. This increase reversed of 14-year trend of declining rates of private coverage for children.

The number of Americans under age 65 who got private insurance coverage through the federal Health Insurance Marketplace or state exchanges rose from 6.7 million (2.5 percent) in the last quarter of 2014 to 9.7 million (3.6 percent) in the first three months of this year, the center said.

Results from another survey, the Gallup-Healthways Global Well-Being Index, indicates that the uninsured rate fell from 17.3 percent in the full year of 2013 to 11.7 percent in the first half of 2015.

Gallup-Healthways shows the 10 states with the largest reductions of the percentage of the uninsured from 2013 through the first half of this year. Since the individual mandate became effective under the ACA in 2014, Arkansas and Kentucky saw the sharpest reductions in their uninsured rates. In Oregon, Rhode Island and Washington state, there was a reduction in uninsured rates of at least 10 percentage-points.