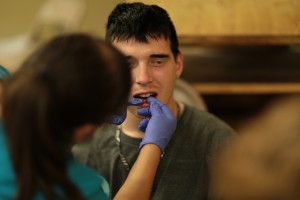 States across the country have shown progress in getting more Medicaid-eligible children into dental chairs in recent years.

Meanwhile, poor adults in many areas continue to go without care. A new study concludes that while 95 percent of American adults value keeping their mouths healthy, low-income adults often fail to achieve it.

“More than one out of three low-income adults say they avoid smiling and 17 percent report difficulty doing usual activities because of the condition of their mouth and teeth,” concludes the report from the American Dental Association’s Health Policy Institute (HPI).

The study echoes some of the main findings included in another HPI paper released last fall. That report concludes that while a longstanding gap in dental visits has narrowed between publicly and privately insured children; privately insured adults remain far more likely to get care than those with Medicaid benefits.

This new paper offers additional findings, as well as a state-by-state analysis of oral health indicators such as community fluoridation and Medicaid reimbursement rates.

The conclusions were based upon an HPI analysis of federal, state and private insurance and American Dental Association data, as well as responses to a Harris Poll survey conducted for HPI.

In an accompanying commentary, the study’s authors call for replication of state successes in increasing care to children – and expansion of dental benefits under the Affordable Care Act and Medicaid to help address the needs of adults.

States such as Connecticut, Maryland and Texas, which have shown progress in getting care to poor children, should serve as models for reform in other states, according to the authors. They attribute measures such as increased Medicaid reimbursement rates and streamlined Medicaid paperwork – steps long advocated by organized dentistry – to the successes in those states.

In terms of getting better care for adults, the authors call on policymakers to “rethink” how dental care is handled on the state and federal level.

“While more and more private medical insurance plans in the health insurance marketplaces established by the Affordable Care Act are covering dental benefits for children, there are far fewer for adults,” they write. “This is despite the fact that dental care is a high priority among young adults who are shopping for health insurance.”

At the same time, adult dental benefits are considered an optional part of Medicaid.

The shortage of care for poor and under-insured adults has been linked to increasing and costly emergency room use for dental pain and infection.

“Implementing a comprehensive dental benefit for Medicaid adults in states that currently lack one is estimated to cost $1.4 billion to $1.6 billion per year,” they note. A similar amount is spent annually on emergency room visits for dental conditions, “one third of which is paid for by Medicaid,” they say. “Health care policy in the United States clearly emphasizes oral health for children,” they write. “It might be time to reconnect the mouth and body for adults.”

How did your state do in the new HPI report? It might be interesting to check.