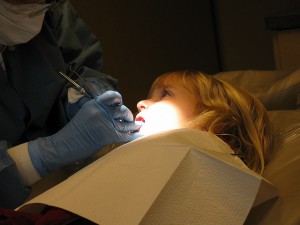 More American children are obtaining dental services now than a decade ago. What’s more, a longstanding gap in dental visits has narrowed between publicly- and privately-insured children, according to a new state-by-state analysis of dental utilization trends from the American Dental Association’s Health Policy Institute (HPI).

The picture is far different for adults, who at all income levels are making fewer trips to the dentist. Adults with private coverage remain far more likely to get care than those with Medicaid dental benefits, the study found.

A number of factors, including the cost of dental care and the availability of coverage and services could be driving the trends, according to the report.

In nearly all states and the District of Columbia, Medicaid dental visits by children increased between 2005 and 2013, according to the study.

Connecticut showed the most dramatic gains with 64.3 percent of Medicaid children getting a dental visit in 2013, up from 31.9 percent in 2005.

Ohio fared the worst, actually losing ground over the decade; utilization rates in the state stood at 24.3 percent in 2013 – down from 36.3 percent in 2005. Data for Maine and Mississippi were not available for 2005.

Overall, 48.3 percent of Medicaid children in the United States made a dental visit in 2013, up from 35.3 percent in 2005. Among children with private insurance, 64 percent obtained dental care in 2013, up from 59.8 percent in 2005. While the relative gap in dental visit rates narrowed between publicly and privately insured children in 45 states and the District of Columbia, poor children still lagged behind wealthier peers in getting dental visits in nearly every state. Still, in two states – Hawaii and Texas – dental care utilization was actually higher for Medicaid than for privately insured children in 2013.

Children are entitled to a wide range of dental services under Medicaid. But adult dental benefits are optional for states and in some states they are extremely limited.

Compared with children, the report found much lower utilization rates among adult Medicaid beneficiaries and wider overall gaps between those with public and private insurance. Among those living in 21 states offering at least some adult dental benefits under Medicaid, the gap was the widest in Vermont, where 65.9 percent of privately-insured adults got dental care, compared with just 13.2 percent of adults covered by Medicaid.

The gap was narrowest in Alaska, where 52.6 percent of privately insured adults had a dental visit, compared with 34.8 percent of adult Medicaid beneficiaries.

The findings were based upon HPI’s analysis of Medicaid and private insurance claims data for 2005 and 2013. The study’s authors noted that the data did not describe the type of care received or its outcome.

“We acknowledge that a major weakness in our analysis is that we focus only on dental care utilization and not, for example, treatment plan completion rates or oral health status,” they wrote.

They also acknowledged that some part of the change in utilization rates can be attributed to a 2010 change in reporting methods by the Centers for Medicare and Medicaid Services (CMS).

Prior to 2010, CMS based dental care utilization rates upon children ages 0 to 20 years who were enrolled in Medicaid at any time during the fiscal year. But beginning in 2010, the rate was based upon children in that age range who were enrolled continuously in Medicaid for 90 days or more during the fiscal year. The authors also noted that the study lacked a consistent time series of data showing the percentage of dentists accepting Medicaid.

Many studies have concluded that a shortage of dentists willing to serve Medicaid patients has contributed to a lack of care for beneficiaries over the years.

“Specialty care, such as mental health care and dental care, may be particularly difficult for some Medicaid enrollees to obtain,” noted the U.S. Government Accountability Office (GAO) in an assessment of Medicaid in July in conjunction with program’s 50th anniversary.

That report, which examined data up to 2010, concluded that while utilization is improving, access to dental care has remained a problem for Medicaid patients. The lack of care has had serious oral health consequences for poor beneficiaries who often face elevated risk for disease, and at the same time are more likely to go without treatment.

“In recent years, Medicaid enrollees’ use of dental services increased, but some access problems persist,” the GAO report said. “We found that while the percentage of individuals with Medicaid dental coverage who had a dental visit increased from 28 percent in 1996 to 34 percent in 2010, individuals with Medicaid dental coverage were still much less likely than privately insured individuals to have visited the dentist. About two-thirds of Medicaid-covered children, for example, did not visit the dentist at all in 2010, while most privately insured children did.”