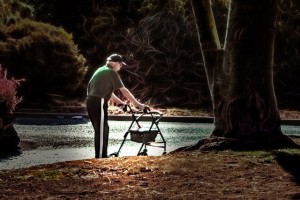 In a large-scale survey of older adults in assisted living or who lived at home, 15 percent were considered frail, and 45 percent were pre-frail, or at heightened risk of becoming physically fragile. Frailty can increase risk of falls, vulnerability to chronic disease and disability. Understanding this condition and finding ways to prevent or slow its onset could improve quality of life for many older adults and help reduce health costs. The survey results appeared in the September 2015 issue of Journals of Gerontology: Medical Sciences.

The extent of variation among minority groups compared with whites was “striking,” the study’s authors said. Frailty prevalence was 65 percent to 85 percent higher for blacks and Hispanics and more than twice as high among those in residential care versus community settings. It was four times higher among the oldest age group compared with the youngest, and the lowest income quartile quartile versus the highest. For most regions, there was a generally decreasing trend in frailty prevalence with greater income; in the Mountain region, frailty prevalence varied little among income quartiles below the highest.

Most surprising was the significant racial and geographic differences said lead author Karen Bandeen-Roche, Ph.D. “We can’t really explain the regional differences. We know there are health differences across the country, in diet and to some extent in exercise habits…active lifestyle might be a factor.”  The data on racial differences could be due to a number of factors and warrants additional investigation, she said.

Chronic disease and disability prevalence increase steeply with frailty. Among the frail elders surveyed, 42 percent were hospitalized in the previous year, compared with 22 percent of the pre-frail and 11 percent of those considered robust. Hip, back, and heart surgery in the last year were associated with frailty. Over half of frail persons had a fall in the previous year. Reducing frailty could reduce hospital admissions and costs by reducing reduce fall risk. Healthier seniors also have better chances of surviving major surgery and enjoy a better quality of life.

The 45 percent of participants who were considered “pre-frail” had begun to experience symptoms of frailty, but to a lesser extent. These pre-frail elders were a prime target of the study, Bardeen-Roche said, because better understanding the progression of frailty can help practitioners develop recommendations (such as changes to diet or exercise) that potentially could extend people’s quality of life in the later years.

Researchers looked at 7,439 participants in the 2011 baseline of the National Health and Aging Trends Study, a longitudinal study of people age 65 and older. Participants either lived at home or in an assisted-living center. Each completed a two-hour in-person interview that assessed frailty based on weakness, exhaustion, low physical activity, shrinking and low walking speed. Participants also were asked about their medical history and ability to perform daily tasks like meal preparation and household chores.