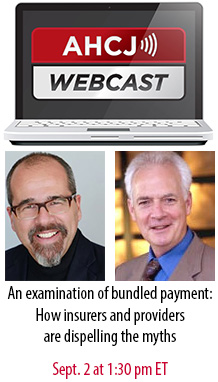 Since then, other experts have come forward to criticize not only the Comprehensive Care for Joint Replacement (CCJR) proposal announced last month, but also the Bundled Payments for Care Initiative (BPCI) program that began in April 2013. Both programs come from the federal Centers for Medicare & Medicaid Services.

You can find detailed criticism of CCJR from Harold Miller, president of the Center for Healthcare Quality and Payment Reform, on the CHQPR’s blog, and from Suzanne Delbanco, executive director of Catalyst for Payment Reform, and Francois de Brantes, executive director of the Health Care Incentives Improvement Institute (HCI3), on the Health Affairs blog. For an explanation of how CMS can improve the BPCI program, see this HCI3 blog post from de Brantes.

Given this level of criticism, we invited de Brantes to join us for an AHCJ webinar, An examination of bundled payment: How insurers and providers are dispelling the myths, on Wednesday, Sept. 2, at 1:30 pm ET. Few health policy experts know more about bundled payment than de Brantes, who has implemented HCI3’s form of bundled payment (called the Prometheus Payment model) since 2007.

During the webinar, de Brantes will explain why bundle payment is useful for many kinds of care delivery and how it aligns financial incentives to control costs and reduce complications. He also will dispel some of the common myths about bundled payment, such as it’s too complicated and only good for procedures and not for managing the care of patients with chronic conditions.