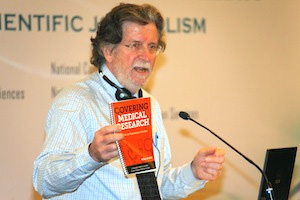 The site, known for its systematic reviews and ratings of news stories about health care, had been funded since 2005 by the Informed Medical Decisions Foundation but lost its funding July 1, 2013.

The $1.3 million grant will allow the site to rebuild and expand its team of reviewers, hire a full-time managing editor, add new reviews and it will fund a number of other initiatives.

“What Gary created and grew has been a terrific service to our profession,” said Len Bruzzese, AHCJ’s executive director. “It’s reassuring that his work will continue.”

Schwitzer, who served on the AHCJ board of directors and wrote its slim guide, “Covering Medical Research,” has specialized in health care journalism in his 30-plus years in radio, television, interactive multimedia and the Internet.

The site’s mission is “to improve the public dialogue about health care by helping consumers critically analyze claims about health care interventions and by promoting the principles of shared decision-making reinforced by accurate, balanced and complete information about the tradeoffs involved in health care decisions. “

The Laura and John Arnold Foundation’s website says its “objective is to produce substantial, widespread and lasting reforms that will maximize opportunities and minimize injustice in our society” and research integrity is one of its focus areas.

Schwitzer emphasized in his announcement that funders do not influence the content on the site.