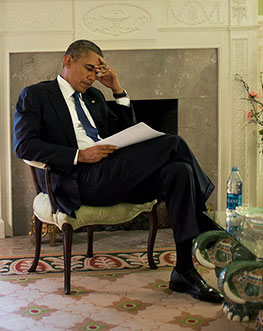 Blame it on Obamacare.

That’s what you hear, over and over again. Anything in the health care system that someone doesn’t like, it’s Obamacare.

Sam Baker of the National Journal took a look at some of the things people are blaming on Obamacare – high deductibles, narrow networks, employers cutting benefits – and reminds us that they were already part of the health care landscape, before the Affordable Care Act. He writes:

Welcome to the Obamacare era.

The healthy are subsidizing the sick. Insurance companies are tightening access to doctors. Plans with low premiums have high deductibles. Sometimes it rains, Nickelback is still a band, and people continue to die literally every day.

Plan cancellations? That you can in fact blame at least partly on the ACA’s new rules about essential benefits. (Even so, there was a lot of churn in that market and some plans were cancelled each year before the health law.)

So when you are reporting and someone blames something they don’t like in their health care on the health law – be alert. Not every one whose work hours are cut, or whose insurance costs rise, or whose doctor leaves a health plan, or who faces a higher deductible can blame it on the health law. These trends have existed for years, and sometimes they are more pronounced at other times. Don’t take every assertion at face value.

One D.C. restaurant, for instance, recently announced it was shutting down what it described as its “unprofitable” Friday buffet because of the health law. It said it would continue its Saturday buffet and improve its Sunday brunch. Maybe if the ACA gets blamed for the demise of the Friday buffet, it can get credit for the brunch.