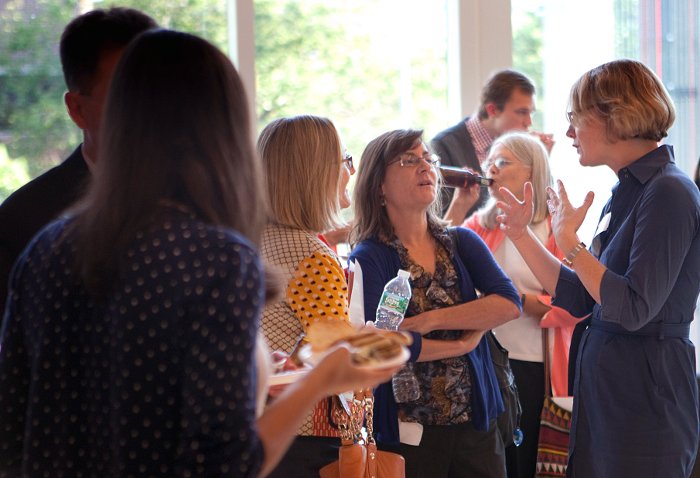 With the opening of health care exchanges just days away, AHCJ’s Washington, D.C., chapter figured the time was ripe to share tips about how to cover the rollout of the latest part of health care overhaul.

About 40 journalists, most of them AHCJ members, attended the session at NPR’s new headquarters on Sept. 16.

They heard from some top health reporters, including Julie Rovner of NPR, Sarah Kliff of The Washington Post and Politico’s Joanne Kenen – who is AHCJ’s core topic leader on health reform – along with Sabrina Corlette from Georgetown University and a top White House adviser, who spoke off the record.

The event was put on in conjunction with the Alliance for Health Reform. Before the roundtable, journalists munched on appetizers and sipped wine, beer and soft drinks. Afterward, some journalists took tours of the NPR newsroom.

The launch of the online marketplaces on Oct. 1 is one of the biggest moments for the Affordable Care Act. Millions of uninsured Americans will have a chance to buy coverage. And the success or failure of the law will be determined, in large measure, by how many eventually do.

The enrollment period for the first year runs through March 31.

Kenen advised reporters to remember that the exchange rollout is as much a political story as it is one about a new health policy. She cautioned journalists not to try to make a final judgment on how the exchanges work after a few days or even few weeks.

Kliff said it’s impossible for national writers to try to cover how the marketplaces work in all 50 states, so it’s wise to pick a few different places that can serve as bellwethers, either because they are being run by the state or the federal government or for other reasons, such as the state’s political leaning.

While the exchanges, like the law, are complex, she said the best stories are the ones that try to answer the most basic questions.

She said journalists should build up their lists of nonpartisan experts ahead of time to be ready for late developments.

“This is one of the most challenging stories of our life,” Georgetown’s Corlette said. She said reporters will have to be careful about not using anecdotes about problems with the marketplaces to draw sweeping conclusions without data.

According to Corlette, it will be years before we know definitively how the marketplaces do their job of providing people affordable coverage. She said Georgetown researchers will be gathering data to examine how the exchanges work in states that were resistant to the law versus those that were more accepting.

For more information about the D.C. chapter, contact Phil Galewitz at pgalewitz@Kff.org.

1 thought on “D.C. chapter gets tips on covering Obamacare rollout”