Since the bills are not identical, the final legislation must first be negotiated in a conference committee. Not all the provisions will survive, although the final bill most likely will more closely resemble the Senate version, which includes repealing the Affordable Care Act’s individual mandate. END_OF_DOCUMENT_TOKEN_TO_BE_REPLACED 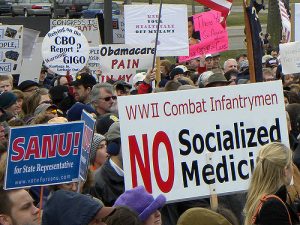 But, as we have seen, the task of repealing the ACA is hard, in part because the legislation has changed the health care landscape in so many ways. END_OF_DOCUMENT_TOKEN_TO_BE_REPLACED

AHCJ president Trudy Lieberman writes at CJR.org that, in his speech last week, President Barack Obama didn’t put anything new on the table, he just arranged the existing place settings to make them look more palatable to three key groups of constituents: the insured, the uninsured and those on Medicare.

In other words, the public option, should it exist, will be very limited, there will be an individual coverage mandate and Medicare won’t be footing any of the reform bill. Lieberman ends her column with the polite request that the media not allow itself to be sidetracked by South Carolina congressman Joe Wilson’s “You lie!” outburst and instead focus on how the president’s proposals would affect their readers.

In a related piece, Lieberman took the time to praise two outlets which managed to squeeze past all the political posturing and report on the real issues surrounding health care reform. The Kansas City Star‘s Diane Stafford looked for answers to hard questions about the enforcement of an individual insurance mandate, while Kaiser News Service’s Jordan Rau explained just how expensive the individually mandated coverage could be.

As part of her ongoing Who will be at the Table series, Lieberman points out that Gun Owners of America, the NRA’s smaller rival, is opposing current reform proposals because they’re afraid gun-related medical information would end up in a national health database, and because they’re wary of an individual insurance mandate.

In another report, Lieberman posted the results of her interviews with another group, small business owners and employees in a Midwest college town, who sounded unsure about whether they were even at the table or not.