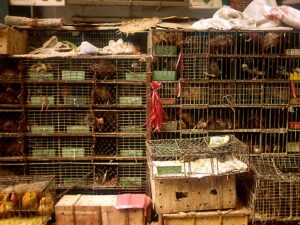 The Qingping market in Guangzhou, China. (Photo by Tr1xx via Flickr.)

Since the early months of 2020, scientific debate has raged over the origin of COVID-19 and whether it emerged from the Wuhan seafood market (with a zoonotic transmission from animals to humans) or started as a breach from a Wuhan biosecurity lab or elsewhere. The debate over the origin spilled over to politics as China clamped down on the public release of scientific information about the pandemic’s origin since March 2020.

So, what is currently known about the origin of this virus?

For most of the past two years, China’s failure to cooperate with the Word Health Organization (WHO) and other countries on the pandemic’s origin hunt has seeded conspiracy theories — including that the Chinese government caused the pandemic or that the virus escaped from a biosecurity lab in the United States.

In August 2021, the U.S. director of national intelligence published a declassified report with a clear summary of the debate about the virus’s origins. The report said there was broad agreement that the first cluster of cases emerged in Wuhan in December 2019; the virus wasn’t a biological weapon or genetically engineered and the government didn’t know about the virus before the pandemic emerged.

However, the U.S. intelligence community was divided on whether the virus emerged from an animal or accidentally from a lab, with about half of analysts saying it was likely zoonotic and connected to the Wuhan market but had “low confidence” in this assessment. Others said they had confidence in the accidental lab leak theory, or there wasn’t enough evidence to have confidence in either theory.

Last month, researchers added more data to the picture. In February 2022, scientists published three non-peer-reviewed research studies about the origins of the COVID-19 pandemic, which virologists say bolster the zoonotic hypothesis. One paper traced the clustering of the initial infections at the Hunan market and another examined genomes of the earliest cases, both of which suggested a zoonotic source. The third, published by Chinese health authorities, concluded the virus was “prevalent” in Hunan market sewage in the early stages of the pandemic.

“These analyses add weight to original suspicions that the pandemic began at the Huanan Seafood Wholesale Market, which many of the people who were infected earliest with SARS-CoV-2 had visited,” wrote Science Journalist Amy Maxman for Nature.

Still, the studies couldn’t definitively rule out the lab leak theory because none of them were able to determine the specific animal source of the virus. The China study said it didn’t find SARS-CoV-2 in any animal specimens and concluded the market might have been an “amplifier” of the pandemic rather than the source.

“They are interesting studies, but I don’t think they close the case on what happened with the origins of the virus,” Jesse Bloom, an evolutionary biologist at the Fred Hutchinson Cancer Research Center, told Science magazine.

To try to get to the definitive answer, WHO’s Scientific Advisory Group for the Origins of Novel Pathogens, in the coming weeks plans to outline what specific studies are still needed.

Among the research gaps are samples from farmers and wildlife that supplied animals to the Wuhan market’s vendors, which could shed light on the animal that transmitted the virus to humans. Conservation biologists documented more than 47,000 animals, including protected species, that had been sold at the Wuhan market up until November 2019, many of which were known to be reservoirs of infectious diseases, according to Nature.

Further, the WHO has urged China to analyze blood donation samples taken in Wuhan between September and December 2019, to determine if there were SARS-CoV-2 antibodies in humans before the outbreak had been identified in mid-December 2019. Whether Chinese authorities will respond to the WHO is unknown.

“Without cooperation from China,” Yanzhong Huang, a specialist on China and global health at the Council on Foreign Relations told Nature. “There isn’t much that anyone can do.”

For reporters looking for virologists and evolutionary biologists to interview about the origin of the virus, consider contacting these experts: