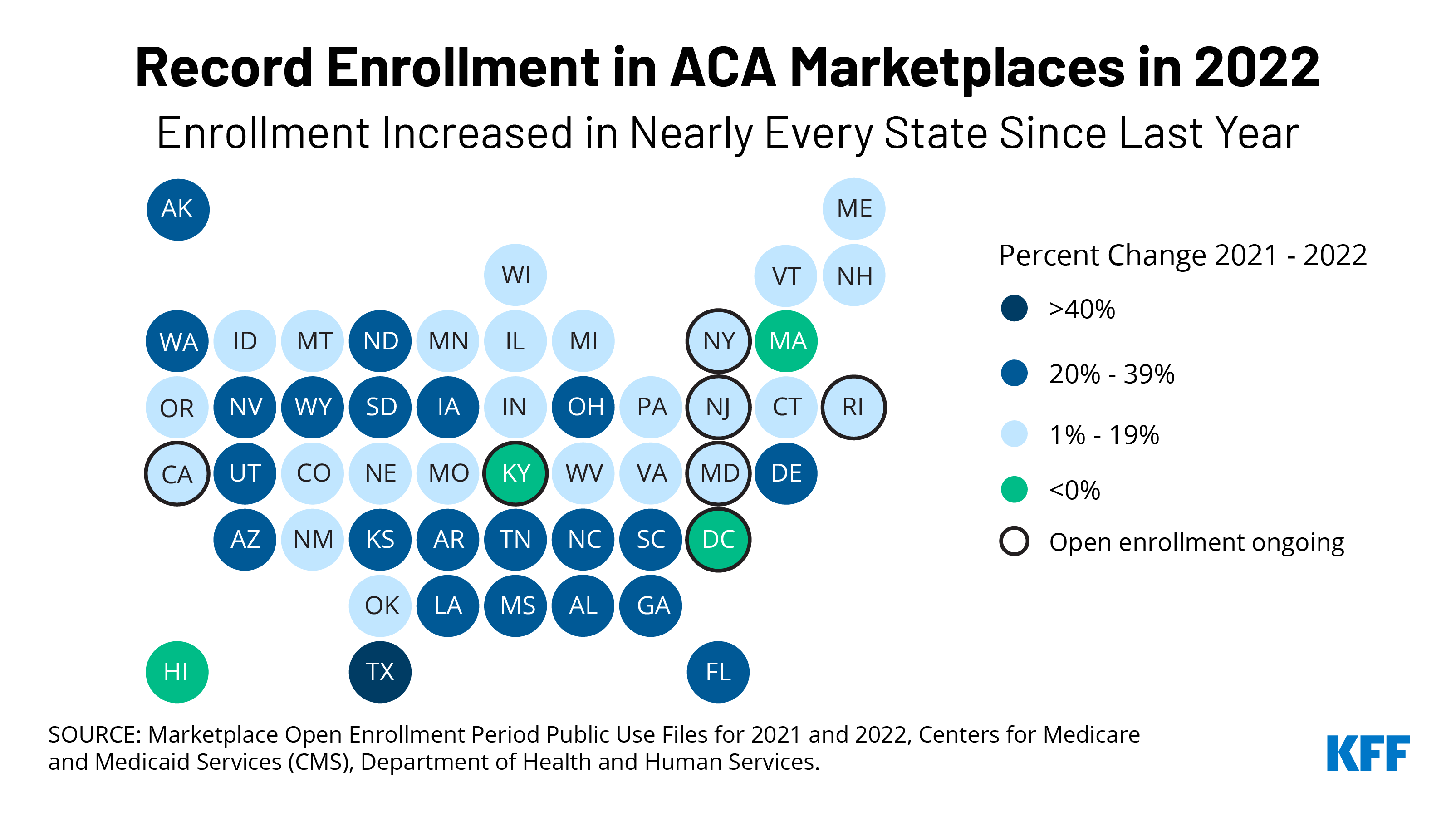 This map from the Kaiser Family Foundation shows the percentage change in enrollment in the Affordable Care Act marketplaces in each state from 2021 to 2022. It shows enrollment increased in almost all states. Accessed Feb. 1, 2022. Reprinted with permission.

After a record number of consumers signed up for health insurance coverage under the Affordable Care Act (ACA), Bob Herman and Caitlin Owen at Axios warned on Monday morning that increased enrollment could be in peril unless Congress acts this year to keep premiums low.

“Democrats are touting record Affordable Care Act enrollment, but a lot of those gains will be wiped away next year unless Congress takes action,” Herman and Owen said.

This angle is crucial because, as Herman and Owen explained, the Democrats increased how much government pays in health insurance premium subsidy assistance for low- and middle-income Americans when they passed the American Rescue Plan Act (ARPA) last March.

In multiple blog posts last year, we reported about how the increased subsidies could help millions of Americans, including this post in October, “Approximately 80% of consumers expected to save significantly on 2022 Affordable Care Act plans,” and this one in April, “New health insurance subsidies will require strong explanatory journalism skills.”

The financial assistance built into the ARPA led to a 21% increase in ACA enrollment since last year, totaling 14.5 million consumers who signed up since last fall, Herman and Owen wrote. “If you include other special ACA plans in New York and Minnesota, total enrollment is closer to 15.5 million people, according to marketplace tracker Charles Gaba,” they added. Gaba runs the ACA Signups site.

The problem for the Biden administration and for Democrats in Congress, however, is that the enhanced subsidies are scheduled to end on Dec. 31. A measure to extend the improved premium subsidies through 2025 was included in what’s called the build back better legislation, which is stalled in the U.S. Senate. It’s unclear if the increased subsidies will be included in any new legislation, Herman and Owen reported.

On Jan. 27, the federal Department of Health and Human Services reported that 14.5 million people signed up for health insurance coverage through the ACA’s marketplaces during the open enrollment period since Nov. 1, including 5.8 million people who gained coverage since Biden took office last year. Although the federal government’s enrollment period ended Jan. 15, enrollment continues until Jan. 31 in five states (California, Kentucky, Rhode Island, New Jersey, New York and the District of Columbia), according to a report from Louise Norris at HealthInsurance.org. Also, enrollment continues in Maryland until Feb. 28, for coverage that starts March 1, Norris added.

In a statement touting the enrollment numbers, HHS said consumers signing up through the federal marketplace at HealthCare.gov saw their average monthly insurance premiums fall by 23% when compared with what consumers paid during the 2021 enrollment period that ended before the ARPA passed.

Covering this story is a challenge because health insurance subsidies are complicated. Therefore, one of the best ways to report on open enrollment is to find a consumer or family who benefited from the enhanced subsidies. Christopher O’Donnell pursued this angle for the Tampa Bay Times in this article, “Florida sets new record for Affordable Care Act enrollment.”

“With rent, food and other bills, the 35-year-old Seffner father couldn’t afford the $400 a month quotes he got from private health insurers to cover him, his wife and two young children,” O’Donnell wrote. “He was so worried, Nuth considered moving his family to Canada or Australia, which have universal health care.”

With assistance from ACA navigators, Nuth enrolled his family in coverage that will cost him $18 a month, O’Donnell reported.

Another way to cover the record enrollment story is to focus on what happened in each state. See, for example, this thorough review of the angles from Sara Wilson at the nonprofit Colorado Newsline, or this one about enrollment in Michigan from JC Reindl at the Detroit Free Press. Reindl noted that 303,550 Michiganders signed up for ACA coverage, a record high since 2017 and that the state’s percentage of those without health insurance dropped to about 5%.

For the rest of this year, the story about ACA enrollment will be important because Democrats will continue to push to extend the enhanced subsidies.

Inaction on the subsidies will be politically risky for Democrats. “The bottom line: As Democrats try to salvage their reconciliation package, preserving the larger ACA subsidies is likely to be a top priority,” Herman and Owen wrote.