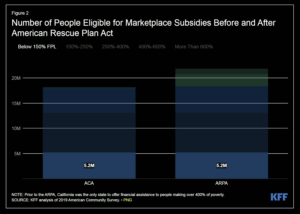 Scott’s reporting was based on what he said were new federal projections shared exclusively with Vox. When the ARP took effect on April 1, it greatly expanded eligibility for premium-payment assistance (also called subsidies or premium tax credits) under the Affordable Care Act (ACA) to help individuals and families pay for health insurance coverage bought on the federal marketplace (at healthcare.gov) and on the state-run marketplaces, he noted.

The improvements made under the ARP are so significant that they require health care journalists to use all of their explanatory journalism skills to outline how a wide cross-section of Americans could benefit by becoming newly eligible for subsidies or for getting higher subsidies than they get already.

Scott’s article covers a lot of this territory. For example, the ARP boosted the subsidies for those consumers who already have received subsidies. That means those individuals and families can go back to the marketplace to get a reduced monthly premium rate. Another change allows more Americans who are currently uninsured to get covered, and many of them can enroll now in a plan in which the subsidy would pay for the entire monthly premium, he added.

Keep in mind, however, that even when subsidies cover all or most of the premium, consumers could still need to pay for copayments, deductibles, and coinsurance when they visit a hospital, emergency room, doctor or other provider.

For The New York Times, Sarah Kliff and Margot Sanger-Katz also had a thorough report on the improvements made under the ARP, explaining that nearly everyone who has an ACA-compliant health plan can qualify for increased premiums subsidies by going back to healthcare.gov or to one of the state marketplaces.

In addition, those Americans who buy health insurance outside of the ACA marketplaces may qualify for substantial help and could benefit by reviewing their options and switching to a subsidy-eligible plan, they wrote. This point is important because many consumers get coverage outside of the ACA—through a health insurer’s website, for example. Those consumers may not know that they could get a better deal by going to the ACA marketplace or to one of the state-run marketplaces.

To assist consumers we can use examples, which is one of the best explanatory tools available. Kliff and Sanger-Katz did so when they reported that a 64-year-old who earns $30,000 would see monthly premiums drop to $85 from $195 for a midlevel plan. “A family of four that earns $40,000 would go from paying a $136 premium to nothing at all,” they added.

Using the Health Insurance Marketplace Calculator from KFF or the calculator at healthcare.gov allows us to show how readers, viewers or listeners would benefit in every ZIP code.

This report from The Commonwealth Fund explains how the Medicaid funding in the ARP would help states.