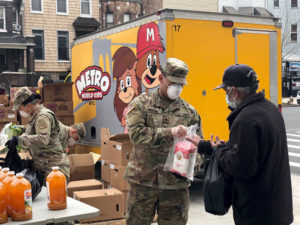 Food insecurity — when people lack access to food or go hungry due to poverty or other challenges — remains a serious problem for many older adults. A new study finds that more than 25% of people with both Medicaid and Medicare, the dual eligibles, said they were food insecure. Among all older adults in the survey, food insecurity was most common (6.2%) in those 75 to 84; it was least common (4.8%) in adults 85 and older.

Social issues such as hunger, inadequate housing, social isolation and poverty are linked to poor health, especially as we age. While the overall prevalence of food insecurity in this cohort was lower than in the general U.S. population, nearly 6% of respondents said they did not always have enough money to buy the food they needed. Black and Hispanic older people were associated with a 10% or greater prevalence of food insecurity in 2015. In contrast, 8.3 percent of American households with a family member aged 65 or older and 9.2 percent of all older adults experienced food insecurity in 2015. According to the team from the Institute for Health Research, Kaiser Permanente, Colorado, the study identified several associations with health and social issues not previously reported, including anxiety, oral or dental concerns and lack of someone to call for help.

They analyzed information from a health survey given to more than 50,000 older adults between 2012 and 2015. The survey is part of a free annual wellness visit for Kaiser Medicare Advantage members. The study assessed food insecurity with a single question, “Do you always have enough money to buy the food you need?” giving a yes or no response option.

Researchers also found food insecurity was more common among those who in the year before the survey were:

The analysis also found that at least 10% of those who reported fair or poor health or quality of life, oral health problems, trouble with multiple activities of daily living, or had no one to call for help also reported a higher prevalence of food insecurity.

The researchers concluded that identifying food insecurity in older adults should be combined with methods to connect older adults with community-based food resources. The authors note that their findings may not generalize to fee-for-service Medicare beneficiaries or other geographic regions, and a lower prevalence of food insecurity among Kaiser Permanente members may reflect their higher socioeconomic status than older adults nationally. The study was published online ahead of print in the March 18 edition of the Journal of the American Geriatrics Society.